After the tense 2 weeks wait, you then have to start monitoring your HCG levels, to confirm they are rising well.

However, hurdles do not stop here. After the HCG levels have risen well, you then need to start doing serial ultrasound scans to confirm your pregnancy is fine! This atlas will help you make sense of all the black and white images and grey blobs you see on the ultrasound screen! These images are courtesy N M Medical Center. These scans were done for a patient who was 7 weeks pregnant ( 6w4d, to be precise). This is a very reassuring scan. The gestational ( pregnancy) sac (labeled as GS) contains amniotic fluid and is well defined. It is about 2 cm in size.

You can see the yolk sac (labeled as YS) within the pregnancy sac very clearly, as a white ring. The fetus is well-formed, and its length is about 1 cm. This is labeled as the CRL ( crown-rump length) on the image and confirms the pregnancy is growing well. 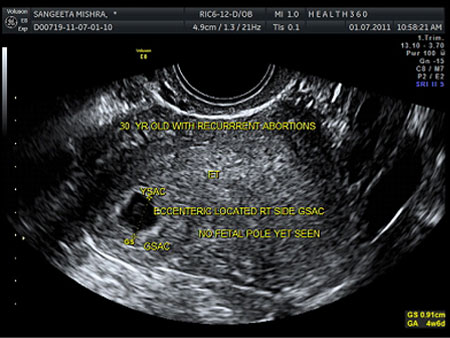 This is a scan done for a 30-year-old patient with a history of recurrent miscarriages. This scan was done at 5 weeks of pregnancy. You can see a well defined gestational sac which is about 1 cm in size; and a yolk sac within the gestational sac. No fetal pole can be seen as yet.

We cannot come to any conclusion as regards the health of the pregnancy based on this single scan. This is true for lots of scans - just one single scan may not provide enough information, especially when done before 6 weeks of pregnancy. A follow-up scan is needed after 1 week, to see if the pregnancy grows normally 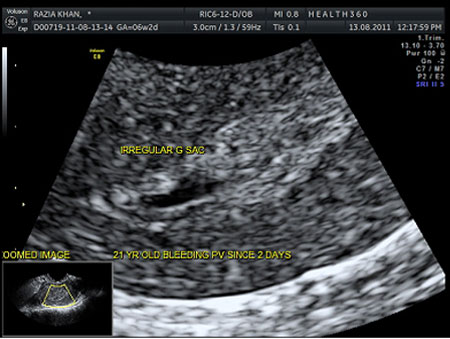 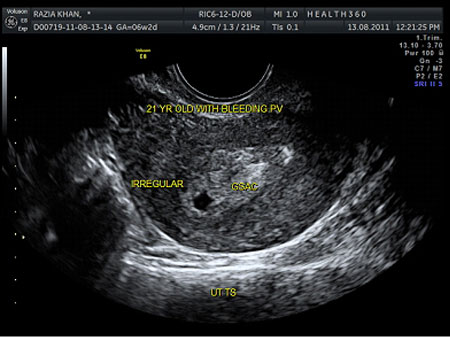 These scans were done for a 21-year-old, who was 5 weeks pregnant and had vaginal bleeding or 2 days. These are worrisome. The gestational sac is irregular and is collapsing. This is a non-viable pregnancy which will most probably abort spontaneously. 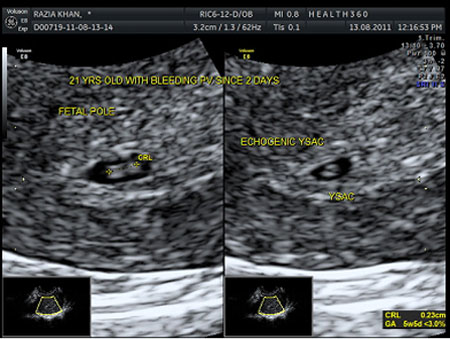 This is a another 21-year-old with a 6-week pregnancy who also had vaginal bleeding for 2 days. See the marked contrast. This scan is reassuring! It shows a twin pregnancy, of which one has a fetal pole; the other one is lagging behind and has a yolk sac, but no fetal pole. This may catch up - or vanish. A repeat scan is needed after 7 days This scan was done for a 22-year-old, who had a pregnancy which was 7W6D, as calculated by her dates. While the gestational sac is seen within the uterine cavity and has regular margins, confirming this is an intrauterine pregnancy, this pregnancy is growing slower than expected. The yolk sac can be seen clearly, but the fetus is much smaller than it should be. The fetal pole has a CRL of only 4 mm, which corresponds to a gestational age of only 6 weeks. A repeat scan will need to be done to see how the pregnancy progresses - another week of anxiety, during which all the doctor can do is wait and watch! This scan was done for a 32-year-old with an 8 weeks pregnancy with severe abdominal cramping and vaginal bleeding. The ultrasound scan is very worrisome. This patient is likely to abort spontaneously. The bleeding within the uterus is seen as a subchorionic hematoma. While this is not a cause for concern, the fact that the gestational sac is irregular; and that no fetal pole can be seen at 8 weeks of the pregnancy confirms this is a non-viable pregnancy. 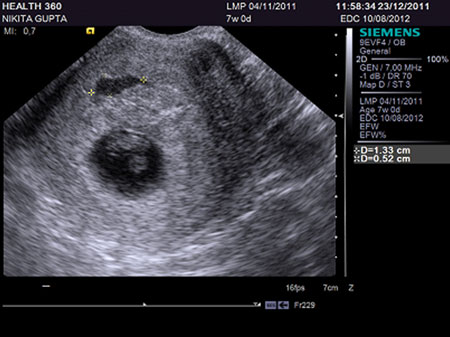 This patient presented with vaginal bleeding at 7 weeks of pregnancy. The collection of blood outside the placenta within the uterus is called a subchorionic hematoma. This is old blood and does not harm the baby. It will most likely get reabsorbed as the pregnancy grows. A repeat scan after 2 weeks will provide a lot of reassurance. This is a healthy pregnancy of 8 weeks gestational age. The baby is 20 mm in size ( labeled as CRL, or crown-rump length), which is appropriate for dates. Seeing this image provides a lot of reassurance that the pregnancy is doing well. This is a healthy 7-week pregnancy as seen by a transabdominal scan. As you can see, the quality of this image is much worse as compared with the transvaginal scan image ( which was done at the same time ) below. This is why most pregnancy scans are now done transvaginally. This is safe and does not harm the baby at all. Remember that the probe is in the vagina, while the baby is in the uterus! 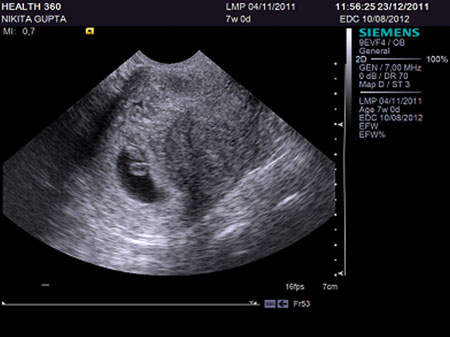 This is the same healthy 7-week pregnancy as seen by a transvaginal scan. As you can see, the quality of this image is much better as compared with the transabdominal scan image above. An M-mode Doppler allows the doctor to show you the heartbeat of your baby.