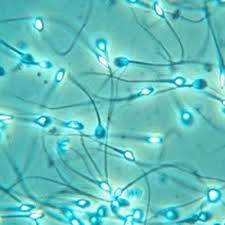 If the sperm sample analysis is poor, further testing such as as blood tests , ultrasound scans and even a testis biopsy are required for efficient male infertility treatment. For the man with a poor semen sample, additional tests which may recommended include specialized sperm tests; blood tests; and testis biopsy. View the sample SEMEN ANALYSIS REPORT

Antisperm Antibodies Test The role of antisperm antibodies in causing male infertility is controversial, since no one is sure how common or how serious this problem is. However, some men (or their wives) will possess antibodies against the, which immobilize or kill them and prevent them from swimming up towards the egg. The presence of these antibodies can be tested in the blood of both partners, in the cervical mucus, and in the seminal fluid. However, there is little correlation between circulating antibodies (in the blood) and sperm-bound antibodies (in the semen).

There are many methods of performing this test, which can be quite difficult to standardize, as a result of which there is a lot of variability between the result reports of different laboratories. The older methods of testing used agglutination methods on slides and in test tubes.

Positive is a Problem

Of course, if the test is negative, this is reassuring; the problem really arises when the test is positive! What this signifies and what to do about it are highly vexatious issues in medicine today, and doctors are even more confused about this aspect than the patients.

Semen Culture Test Ion the semen culture test, the semen sample is tested for the presence of bacteria, and , if present, their sensitivity to antibiotics is determined. Interpreting this test can also be problematic! It is normal to find some bacterial in normal semen samples - and the question which must be answered is : are these bacteria disease- causing or not?

Tests which assess the sperm's ability " to perform" include the following function tests.

An abnormal test needs to be repeated and, if the problem is persistent, one needs to determine if the defect lies in the or in the mucus, by cross-testing with the husband's sperm, donor sperm, wife's mucus and donor mucus
The egg are then incubated with the in an incubator in the laboratory. After 24 hours, the eggs are checked to ascertain how many have been able to penetrate the egg. The result gives a penetration score, which gives an index of the sperm's fertilizing potential.

This test is now obsolete since the correlation between IVF results (the ability to fertilize human eggs) and the SPA (the ability to penetrate zona-free hamster eggs) is quite poor.

If the sperm count is zero, then further testing such as as blood tests , ultrasound scans and even a testis biopsy are required for effective treatment. However, in men with a low sperm count or poor sperm motility, futther testing is usually a waste of money, as it does not affect the treatment options.