Blocked fallopian tubes and Infertility | What should be your next step ?

The tube itself is a muscular highly movable structure capable of highly coordinated movement. The egg and sperm meet in the outer half of the fallopian tube, called the ampulla. Fertilization occurs here, after which the embryo continues down the tube toward the uterus. The uterine end of the tube, called the isthmus, acts like a sphincter, and prevents the embryo from being released into the uterus until just the right time for implantation, which is about 4 to 7 days after ovulation.The fallopian tube enters the uterus at its cornual end.

The tube is much more complex than a simple pipe, and the lining of the tube is folded and lined with microscopic hair like projections called cilia which push the egg and embryo along the tube. The tubal lining also produces a fluid that nourishes the egg and embryo during their journey in the tube. 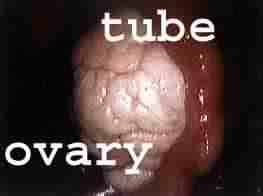 Fig 1. Normal tube and ovary, as seen during laparoscopy

Remember that a doctor cannot judge if your fallopian tubes are open or closed either by an internal examination; or a vaginal ultrasound scan. Unfortunately, this is a very common mistake many patients make, and they assume that if the scan is normal, this means their tubes are open. This is not true. Sadly, many doctors also make the assumption that the fallopian tubes are open, without bothering to test them. Thus, some doctors will assume that a young woman with polycystic ovarian disease must have open tubes, and they start treating her with clomid, without bothering to test the tubal status. This can sometimes be a very expensive mistake ! Just because you have had no symptoms of a pelvic infection does not mean that your tubes cannot get blocked; and if the tubes are blocked, this means the eggs and sperm cannot meet, no matter what medicines you take. This is why it is essential that you ask the doctor to formally test your tubal status before starting any treatment.

The only reliable ways of testing if your tubes are open or closed is by doing either a HSG or a laparoscopy. Personally, I prefer a HSG, because it is much less expensive and provides hard copy documentation.

If a tubal block is found, then what are the next steps ?

The first question is - Are both the tubes blocked ? If only one tube is blocked, then there is no need to take any action at all ! One normal tube is enough for normal fertility. If one tube is open and your doctor advises you to have surgery to open the other tube, please do not agree ! This is because either tube can pickup an egg from either ovary ( a phenomenon which is called transperitoneal migration of the egg.)

The next question is - Where is the block ? The block could be at the terminal (fimbrial) end of the fallopian tube. This often causes the tube to get swollen with fluid, and form a hydrosalpinx. In the past, doctors would perform tubal surgery to open this kind of blocked tubes. However, the results were very poor. The tube would usually close down again; or would never function properly, because its inner lining was damaged - damage which cannot be repaired by surgery. Some of these patients would then go on to have tubal (ectopic) pregnancies.

If the tube is blocked at the cornual end, it's sometimes possible to repair these tubes. Sometimes the block is not a real block, but just an apparent block because of tubal spasm . Sometimes the block is because of a mucus plug or debris, and this can sometimes be cleared with the help of FTR (fluoroscopic tubal recanalisation). This is a bit like doing an angioplasty for the fallopian tube ! ?

Remember that it's impossible for a doctor to judge tubal function. While we know that a blocked tube will not work, it does not follow that an open tube (which may look perfectly normal anatomically on the HSG or the laparoscopy) is in fact capable of functioning normally ! Sometimes the doctor says the spill of dye is sluggish; or that the tubes filled slowly; or that they have a beaded appearance. These are just descriptive terms, and often cause more confusion rather than clarity !

Finding out your tubes are blocked can be quite a blow. Because tubal disease is often silent, there is no way of suspecting tubal blockade prior to doing the tests. Blocked tubes will not affect your menstrual cycle, your health or your sexual life, but they will prevent you from having a baby !

While the results of tubal surgery to repair blocked tubes is poor, the good news is that it is possible to offer very effective treatment for this problem today, thanks to IVF, which allows us to bypass the problem completely ! In IVF, the test tube in the IVF lab performs the role the fallopian tube would normally perform in the bedroom !

If you have a hydrosalpinx , some doctors will want to surgically remove this prior to performing IVF. I do not think this is a good idea at all !