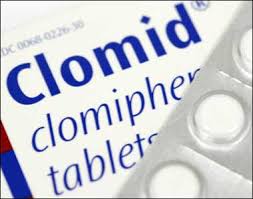 One of the commoner problems with clomid is the increased risk of having twins (clomid twins have become very common !) and higher order multiple births. While the proper use of clomid can help many women to have a baby, and there are many clomid success stories, clomid can also cause hyperstimulation, so it's a drug which should be used with care. Interestingly, clomid can also be used as a diagnostic tool to test a woman's ovarian reserve, in what is called the clomid challenge test.

Clomid (clomiphene citrate) is the drug of first choice for inducing ovulation - making women grow eggs. It is cheap, effective, easily available and well tolerated. It is also used for superovulating normal women to help them grow more eggs.

Clomiphene is an antiestrogen and it acts by "fooling " the pituitary into believing that estrogen levels in the body are low as a result of which the pituitary starts producing more FSH and LH - the gonadotropin hormones which in turn leads to stimulation of the ovaries. Only women who produce estrogen will respond to clomiphene; and some doctors will test for this by seeing if they bleed in response to progestins - a progestin challenge test.

Usually blood testing of progesterone levels (done 7 days after ovulation) accompanies clomiphene treatment to help identify the correct dosage needed. Clomiphene induces ovulation in approximately 70% of appropriately selected patients and has a 30% to 40% pregnancy rate. Most patients who conceive after clomid treatment do so in the first 4 months.

Clomiphene increases a woman's risk of twin pregnancy by approximately 10%. However, the risk of having more than two babies is 1%. Occasionally ovarian cysts occur following clomiphene administration. This is called hyperstimulation and it usually mild and self-limited. These usually disappear when the drug is stopped. The risk of clomid causing problems is more in women who have PCOD.

As the drug is only given for 5 days early in the cycle it does not have any long, term effect on future ovulation or on hormone levels or on pregnancy. Some doctors were worried that the prolonged use of clomiphene would increase the risk of the patient developing ovarian cancer. However, extensive research has shown that this worry is unfounded.

Clomiphene is an easy drug to misuse because it is cheap and easy to prescribe. It is common to find patients who have been taking clomiphene for months on end, with no result. Clomiphene should not be taken, unless adequate monitoring is also performed simultaneously.

It should also not be prescribed for more than 6 months. If it hasn't worked by then, you should move on to the next stage of treatment. Clomiphene is also commonly misused as "empiric " treatment - as a treatment to "enhance fertility" when the doctor cannot offer anything else.

Clomid for men too

Interestingly, clomid is also the most commonly prescribed medicine for infertile men - and the one which is most widely misused. Its use is largely empirical and very controversial as the results are not predictable. This is usually prescribed as a 25 mg tablet, to be taken once a day, for 25 days per month, for a course of 3 to 6 months. It acts by increasing the levels of FSH and LH, which stimulate the testes to produce testosterone and sperm.

The group of men who seem to benefit the most from clomiphene have low sperm counts, with low or low-normal gonadotropin levels. However, while clomiphene may increase sperm counts in selected men, it hasn't been proven effective in increasing pregnancy rates.