Ectopic Pregnancy - The Time Bomb in the Fallopian Tube 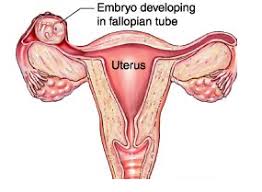 What is an ectopic pregnancy?

An ectopic pregnancy is one which develops outside the uterus. Most ectopics are found in the fallopian tube and these are called tubal pregnancies. However, they can also occur at other pelvic sites and these include: the ovary; the abdomen; and the cervix. 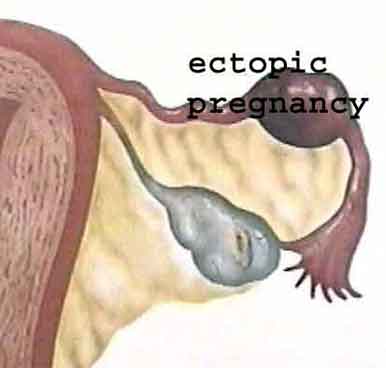 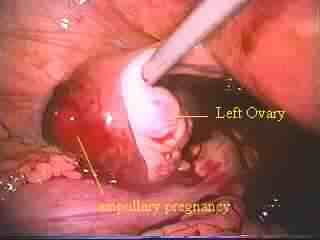 Not a common occurrence

Infertile patients are at increased risk for ectopic pregnancies, for unclear reasons. Perhaps the cause of their infertility is subtle tubal damage. There is also an increased risk for tubal pregnancy after IVF, since the embryo may sometimes migrate after embryo transfer from the uterine cavity to the fallopian tube. The risk of ectopics after GIFT is greater than with IVF.

Making the diagnosis on clinical examination is difficult, and the only suspicious finding may be pain on internal examination.

A tubal pregnancy used to be a catastrophe. Diagnosis was usually made only after the tube had ruptured - and emergency surgery was required to stop the bleeding and save the mother's life. Often this meant removing the whole tube, which was often completely damaged. Consequently, the chances of a patient's conceiving after this was markedly reduced.

Today, an ectopic pregnancy can be diagnosed very early using blood tests for HCG ; and vaginal ultrasound. Both these tests need to be done simultaneously in order to interpret them correctly. Beta HCG is a very specific "marker" for pregnancy. This blood test is very sensitive and if negative, virtually excludes any risk of a significant ectopic pregnancy.


HCG level confirms that the patient is pregnant, but does not provide information about the site of the pregnancy. A vaginal ultrasound allows the doctor to locate the gestational sac of the early pregnancy. Occasionally, the sac may be seen outside the uterus, making a positive diagnosis of ectopic on sonography.

Often, however, the sac cannot be seen clearly in ectopic pregnancies, especially if it is in an early stage. Then, both the scan and HCG levels need to be studied. In a normal intrauterine pregnancy, the doctor should be able to see a gestational sac in the uterine cavity on vaginal ultrasound, if the HCG level is more than 1000 mIU/ml ( this is called the discriminatory zone). However, if the level is more than 1000 mIU/ml and the doctor cannot see a gestational sac , this means that the diagnosis is an ectopic pregnancy.

Sadly , its still common for sonographers to miss the diagnosis of an unruptured ectopic, which is why you need to be alert - and proactively ask the doctor to rule out an ectopic, so he at least entertains this possibility when doing your scan !

A sonographer will only interpret the black and white shadow he sees on his ultrasound screen . He is not a clinician â€“ and the eye only see what the mind knows. Ultrasound works by bouncing high frequency sound waves off the bodyâ€™s tissues. In an early pregnancy, the only thing we can see is the gestational sac, which is a fluid filled structure and appears dark on a scan.

Itâ€™s easy to see this when the sac is in the uterus, because the uterine wall consists of muscles. This is solid, which is why it has a different acoustic texture from a sac . This acoustic contrast makes it easy for us to pick up a very early pregnancy when itâ€™s located inside the uterus . However, when the sac is outside the uterus in the fallopian tube , the acoustic contrast is not as pronounced; which means we have to wait till the sac becomes much larger before we can see it. The danger is that if we wait too long , the sac may burst, leading to internal blood loss and possible death !

If you are worried you may have an ectopic, please register at www.hcgexpert.in . We will help you to monitor your pregnancy and to rule out an ectopic .

Another blood test which can be helpful is a serum progesterone level, which is low ( less than 15 ng/ml) in patients with ectopic pregnancies, as compared to normal pregnancies.

Sometimes, differentiating between an ectopic pregnancy and an early miscarriage can be difficult. In these cases, if a curettage shows that there is no pregnancy tissue in the uterus (as tested by histopathologic examination) then an ectopic is suspected. The diagnosis can be confirmed by laparoscopy, if needed, which shows that the pregnancy is in the tubes, where it appears as a dark bluish bulge.

The major benefit of early diagnosis is that with early treatment it is possible to save the tube, thus preserving fertility and increasing the chances of a normal pregnancy in the future. If the ectopic is very early and the HCG levels low, one can choose to simply wait and watch.

Often, the HCG levels will fall, meaning that the pregnancy is being reabsorbed by the body on its own and no treatment is needed. Medical treatment is also possible. This involves the use of the anti-cancer drug, methotrexate, which acts on the rapidly dividing cells of the tubal pregnancy and kills them, thus preventing the pregnancy from growing further. After giving an intramuscular injection of methotrexate, the beta HCG levels need to be monitored regularly, to ensure they are falling, till they decline to zero.

This confirms that the pregnancy has been successfully destroyed. If the diagnosis is made early, methotrexate treatment of ectopic pregnancies is very successful.

This is also useful for treating tubal pregnancies which have not ruptured. This involves the injection of the toxic chemical, potassium chloride , into the fetus in the tube under ultrasound - guidance. This kills the pregnancy tissue, allowing the body to reabsorb it.

Surgical treatment for early tubal pregnancies can be done through the laparoscope as well; with salpingotomy, the pregnancy can be selectively removed and the tube saved.

If the tube has ruptured, and blood has collected in the abdomen, then emergency surgery is needed. In these cases the tube is often so badly damaged, that it has to be removed entirely. When this occurs, a couple not only mourns the loss of a pregnancy, but also the possible loss or reduction in their fertility. This sense of loss is accompanied by the discomfort and anxiety of having had an emergency operation.

What about the chances of getting pregnant after an ectopic pregnancy?

If pregnancy does not occur within about a year of trying, then treatment is needed. Treatment options for fertility will depend upon what surgery was done for the ectopic pregnancy; and what the condition of the other tube is. Often, a second look laparoscopy is needed, to assess tubal status. Options may include: ovulation induction; tubal surgery; laparoscopic surgery; and often IVF.

Having had an unsuccessful outcome the first time makes getting pregnant very stressful - especially if the tubal pregnancy ended in a rupture. However, with the right treatment, chances of having a baby are quite good - after all, the fact an ectopic pregnancy occurred means that the eggs and sperms are good!