Endometriosis is an enigmatic disorder that affects women of reproductive age and occurs when normal endometrial tissue (the endometrium or lining of the uterus) grows outside the uterus. This misplaced tissue may implant itself and grow anywhere within the abdominal cavity.

Many specialists feel that severe endometriosis is more likely to be found in infertile women who have delayed pregnancy - and for this reason, the condition is sometimes labeled a career woman's disease.

Endometrial tissue, whether it is inside or outside the uterus, responds to the rise and fall of estrogen and progesterone produced by the ovaries during the reproductive cycle. Under the influence of the hormones, the misplaced tissue swells; and when hormonal levels drop, the tissue may bleed. Unlike the normally situated endometrium, which is shed from the body as menstrual discharge, this blood and tissue has no outlet. It remains to irritate the surrounding tissue.

The disease is highly unpredictable. Some women may have just a few isolated implants that never spread or grow, while in others the disease may spread throughout the pelvis. Endometriosis irritates surrounding tissue and may produce web like growths of scar tissue called adhesions. The scar tissue can bind the pelvic organs and even cover them entirely. Many women who have endometriosis experience few or no symptoms. However, in some women, endometriosis may cause severe menstrual cramps, pain during intercourse, and infertility.

It is a disease which has been called an enigma wrapped inside a mystery , and there is a lot about it that we do not understand as yet.

What causes endometriosis?
Several theories exist as to how endometriosis begins. One possibility is retrograde menstruation, the backward flow of the menstrual discharge through the fallopian tubes into the pelvis. According to this theory, the endometrial cells may implant on the ovaries or elsewhere in the pelvic cavity.

What does it look like?
Early implants look like small, flat dark patches or flecks of blue or black paint ( powder-burns ) sprinkled on the pelvic surfaces. The small patches may remain unchanged, become scar tissue or spontaneously disappear over a period of months. Endometriosis may invade the ovary, producing blood filled cysts called endometriomas. With time, the blood darkens to a deep, reddish brown or tarry color, giving rise to the description chocolate cyst. These may be smaller than a pea or larger than a grapefruit.

In some cases, bands of fibrous tissue called adhesions may bind the uterus, tubes, ovaries, and nearby intestines together. The endometrial tissue may also grow into the walls of the intestine - but although it may invade neighboring tissue, endometriosis is not a cancer. Fig 1. Schematic, showing a chocolate cyst (endometrioma) in the right ovary; and peritubal adhesions because of endometriosis 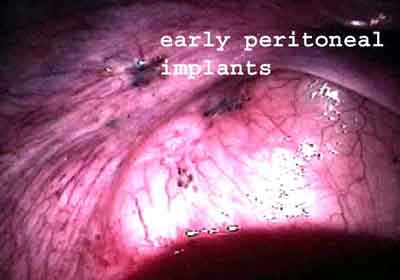 Fig 3. Laparoscopy, showing a small chocolate cyst in the left ovary. This can be very easy to miss, so a careful multiple puncture laparoscopy is essential to make an accurate diagnosis of endometriosis.

What are the symptoms?
Progressively increasing dysmenorrhea (periods pains or menstrual cramping) may be a symptom of endometriosis. These are caused by contractions of uterine muscle initiated by prostaglandins released from the endometrial tissue. A puzzling feature of endometriosis is that the degree of pain it causes is not related to the extent of the disease. Some women with extensive disease feel no pain at all. A woman with endometriosis may notice that as the disease progresses her periods become more painful or that the pain begins earlier or lasts longer.

Endometriosis can cause pain during intercourse, a condition known as dyspareunia. The thrusting motion of the penis can produce pain in an ovary bound by scar tissue to the top of the vagina or in a tender nodule of endometriosis. Most women who have endometriosis report no bleeding irregularities. Occasionally, however, the disease is accompanied by vaginal bleeding at irregular intervals; or by premenstrual spotting.

How does endometriosis cause infertility? The relationship between mild (early) endometriosis and infertility is controversial. The most recent theories regarding the endometriosis-infertility link focus on the fact that endometriosis may lead to a form of mild inflammation within the pelvis. In some women with mild endometriosis, the levels of certain chemicals called cytokines ( released in response to inflammation) are increased in the abdominal cavity, and these hormones may have a negative effect on follicle and egg development, egg-sperm binding and fertilization, normal tubal function, and even implantation. Sometimes, the endometriosis may be coincidental and unrelated to the fertility problem. In these patients, other factors may be involved in a couple's infertility, such as poor quality sperm or ovulation disorders- and the endometriosis is a red herring. Some women who have the condition are able to conceive, while others may be infertile due to endometriosis or a combination of factors.

The disease may hinder conception in various ways - especially when it is severe. Endometriosis may inflame surrounding tissue and spur the growth of scar tissue or adhesions. Bands of scar tissue may bind the ovaries, fallopian tubes, and intestines together and thus interfere with the release of eggs from the ovaries or the ability of the tube to pick up the egg. Rarely, severe endometriosis may cause the tubes to become blocked. The presence of chocolate cysts in the ovary may also impair ovulation.

Endometriosis can often be suspected on the basis of your symptoms. Your doctor may make a tentative diagnosis if you complain of progressively severe menstrual cramps or pain with intercourse. For many patients , making the diagnosis is a big relief - the pain I feel is not all in my head - I have a disease which is causing me to be miserable ! However, this diagnosis can come like a blow as well - especially when you read on the net about all the possible complications which endo can cause ! The good news is that endometriosis does not lead to cancer; and we have may very effective treatment options to manage this.

Some patients with the condition have no discomfort at all. This is why in the past, a laparoscopy was the gold standard for making the diagnosis of endometriosis, as this allowed the doctor to actually inspect the pelvic contents and stage the severity of the disease. The mainstay of treatment also used to be laparoscopy. However, because it involves surgery, many infertility specialists no longer advise laparoscopy for their patients.

Ultrasound scanning is an excellent way of diagnosing chocolate cysts and can pick up cysts which are very small. On scanning, chocolate cysts are complex masses ( which have both solid and cystic components); and are often tender. They can vary in size from a few mm to over 10 cm; and can be bilateral. However, it's not possible to make a definitive diagnosis of endometriosis on ultrasound scanning, as many other conditions can also produce cysts in the ovary. The diagnosis can be confirmed either by aspirating the cyst under ultrasound guidance ( and finding the typical dark old blood which is diagnostic of endometriosis); or by doing a laparoscopy.

The goal of hormonal treatment is to simulate pregnancy or menopause, two natural conditions known to inhibit the disease. In each case, the normal endometrium is no longer stimulated to grow and regress with each monthly cycle, and menstruation ceases. The growth of misplaced endometrial tissue usually will suppressed as well.

To simulate the hormonal environment of pregnancy, birth control pills are prescribed. To be effective against endometriosis, the pills must be taken continuously without pausing for withdrawal bleeding. This state is sometimes called pseudopregnancy.

The hormone derivative danazol is the medication most frequently used to treat endometriosis. During treatment with danazol, estrogen levels are reduced to the low levels characteristic of natural menopause. This state is sometimes called pseudomenopause. Danazol is an expensive medication which is usually prescribed for six months or more. Unfortunately, large endometriotic cysts of the ovary are generally resistant to the drug.

Analogues of GnRH, the gonadotropin releasing hormone, are the newest class of hormones used for endometriosis treatment. These analogues switch off production of FSH and LH from the pituitary, thus inducing a menopausal state. These analogs can be given in the form of special injections called depot preparations, which release small quantities of the drug daily, allowing administration at monthly intervals.

Treating endometriosis with medicines has definite limitations. Medication usually controls mild or moderate pain and may eliminate small patches of the disease. But large chocolate cysts in the ovary are less likely to respond, and drugs cannot remove scar tissue. This is why surgery may be needed to improve fertility by removing adhesions, lesions, nodules or endometriomas.

Laparoscopy can be used as a therapeutic tool. For example, fluid can be drained ; adhesions freed; and patches of endometriosis destroyed using a laser or electrical current. Even large endometriomas can be removed through the laparoscope by a skilled surgeon. Open surgery (laparotomy) is needed only very rarely and should be used only as a last resort.

Please remember that surgery is not always a good idea just because you have endometriosis. This is especially true if you are infertile. How useful operative laparoscopy is in improving the fertility of patients with endometriosis is still a controversial issue ! In fact, surgery can actually end up reducing your fertility. This is because normal ovarian tissue is also sacrificed when removing the endometriotic cyst wall and this can reduce your ovarian reserve.

Treatment cannot cure endometriosis - but it can control it. If an infertile woman with endometriosis fails to conceive , the next option is superovulation with intrauterine insemination, since the fallopian tubes in these patients are usually open. If this fails, then IVF ( in vitro fertilization ) can be very useful. However, the ovarian response in some of these patients can be poor, especially if they have large chocolate cysts, or have had surgery for these cysts. Fertilization rates in some patients with endometriosis can be a little lower than for other patients, perhaps because of an intrinsic oocyte abnormality.

This is still a vexed and controversial issue. While many gynecologists feel that operative laparoscopy should be the first choice, in reality there is little evidence to support this stance. While laparoscopy is useful for treating the endo lesions, whether this actually helps to improve fertility is still unproven ! In fact, overenthusiastic surgery can often push an infertile patient from the frying pan into the fire ! Unnecessary surgery reduces your fertility as normal ovarian tissue is also removed along with the cyst wall, thus reducing your ovarian reserve.

I suggest that patients always test their AMH level ( a simple blood test for checking their ovarian reserve ) before allowing a doctor to do an operative laparoscopy to treat their endometriosis. This is especially true for: older women; women who have had surgery earlier; women with recurrent cysts; and women with large ovarian cysts ( because they are at risk for having poor ovarian reserve, a silent condition called oopause.) If they do have poor ovarian reserve ( as suggested by a high FSH level and a low AMH level), then surgery is not a good idea and they should move onto IVF directly.

If there is a cyst, this can always be treated by aspirating it under vaginal ultrasound guidance, so that the ovarian reserve is not further impaired.

Endometriosis is a disease affecting millions of women throughout the world. For many, the condition goes unnoticed. But for others it demands professional attention, especially when fertility is impaired. The best strategy to maximize chances of conception is to select a specialist who is familiar with the latest developments in endometriosis management.