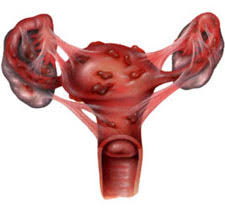 Patients with endometriosis who are infertile are often very confused. They don't know which doctor they should go to ? Gynecologist ? Infertility specialist ? and what treatment they should take. The first point of consultation is usually their gynecologist - and most gynecologists usually advise doing a laparoscopy.

This is usually a knee-jerk reflex - for many reasons. The importance of making the right diagnosis has been drilled into doctors right since Day 1 of medical school - and the only way of making a definitive diagnosis of endometriosis is a laparoscopy. They also sell the patient on this procedure, by telling them that will also allow them to "treat" the endometriosis in the same operation !

Patients are understandably reluctant to undergo surgery - but when laparoscopy is presented as "minimally invasive surgery" with no scars or hospitalization, it's quite easy to convince they to sign up. When doctors say they will do "robotic surgery" or "3-D surgery", patients are even more impressed !

An additional inducement is that laparoscopy allows the doctor to actually treat and "fix" the underlying disease, and it makes a lot of intuitive sense to do so - after all, if there is something abnormal in the body, doesn't it make sense to remove it ? Unfortunately, endometriotis lesions are not like breast lumps - and even if surgery is done, often the disease recurs !

Since patients are led to believe that removing the endometriotic lesions will improve their fertility and allow them to have a baby, they naively agree - especially if they also have pelvic pain because of their endometriosis. However, this thinking is flawed for two major reasons. One is that there is no evidence that treating mild endometriosis improves fertility at all !

Often the endometriosis is an incidental finding - and a lot of for fertile women have endometriosis as well, which can be safely ignored and left alone. Even worse, the surgical removal of endometriosis can actually induce fertility. While removing chocolate cysts, the doctor also ends up sacrificing normal ovarian tissue - and this further reduces ovarian reserve. This can make a bad problem worse, because often the endometriotic deposits themselves can damage ovarian function.

Patients are confused. If they get a second opinion from another gynecologist, they get exactly the same advise ! If they go to an IVF specialist, he may advise IVF treatment directly - and then they are not certain what to do. After all, IVF only bypasses the problem - it does not address the endometriotic lesions directly, so how could it make sense to do IVF rather than do a laparoscopy ?

Read more- Should you treat the endometriosis before doing IVF ?

Here's a simple framework which will help you decide what to do, based on 4 key variables:

If you are older, time is at a premium for you, and you need to seek aggressive treatment in order to get pregnant as soon as possible. The good thing about IVF is that not only does it maximize the chances of your getting pregnant, once you get pregnant your disease will regress, and you will be pain free - allowing you to kill two birds with one stone !

If you have additional disabling symptoms which need to be treated ( for example, pain during sex because of rectal endometriosis), then a laparoscopy may be your first choice, as it can effectively remove these painful lesions, and give you effective relief.

Getting Your Priorities Right

However, if getting pregnant is your primary goal, and the diagnosis of endometriosis was an incidental finding ( for example, when it was diagnosed during a vaginal ultrasound scan), then your priority should be on maximizing your chances of having a baby quickly by using assisted reproductive technology.

The key issue is your ovarian reserve - but unfortunately a lot of patients don't realize this. Neither do most gynecologists, because they are so focused on treating the abnormalities they can see on ultrasound scan and laparoscopy. They often fail to assess the patient's fertility - and this is often done only as an afterthought !


However, if you have poor ovarian reserve, then you need to be wary about opting for surgery, as this can further damage your ovarian reserve. You might want to consider going for IVF directly. Incidentally, this would be the right decision, whether or not you had endometriosis !

The problem with surgery is that not only are the results unpredictable, it can actually end up wasting time. After the surgery, doctors often put patients on medical therapy for 2-6 months, to allow the endometrial lesions to heal, by suppressing them. They then ask patients to try in their bedroom for another six months - and this passage of time can reduce the chances of conceiving even further.

The new diagnostic tools such as high resolution vaginal ultrasound have made the problem worse. Many radiologists will note small ovarian cysts ( 1-2 cm in size) during a routine pelvic scan. They will report these as possible endometriosis - and cause the patient to panic unnecessarily. These often do not require any treatment at all, because masterly inactivity may often be the best option.

The rule is simple - think not just about the disease and its diagnosis, but about your ovarian reserve and your final goal - to have a baby. Your primary aim is not to "treat the endometriosis", but to have a baby. Often we are better at bypassing problems, rather than fixing them !

Patients with endometriosis who are infertile are often very confused. They don't know which doctor they should go to ? Gynecologist ? Infertility specialist ? and what treatment they should take. Be well informed and dont panic