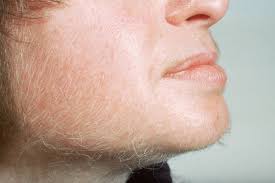 Male-like face and body hair in women is called Hirsutism and may signal the presence of a hormone imbalance or a hormone-producing tumor. Its cause could be Genetic, Polycystic Ovarian Syndrome, Adrenal Disorders or Ovarian Tumors.

Hirsutism is the growth of long, coarse hair on the face and body of women in a pattern similar to that found in men. Besides being cosmetically distressing, hirsutism may also signal the presence of a hormone imbalance or a hormone-producing tumor.

Each hair grows from a follicle deep in the skin. As long as these follicles are not completely destroyed, hair will continue to grow even if the shaft, which is the part of the hair that appears above the skin, is plucked or removed.

Adults have two types of hair, vellus and terminal. Vellus hair is soft, fine, colorless, and usually short. In most women, vellus hairs grow on the face, chest, and back and give the impression of "hairless" skin. Terminal hairs are the longer, coarser, darker, and sometimes curly hairs that grows on the scalp, pubic, and armpit areas in both adult men and women. The facial and body hair in men is mostly of the terminal type.

Most often, excess facial and body hair is the result of abnormally high levels of androgens or male hormones in the blood. Androgens are present in both men and women, but men have much higher levels. These hormones cause hairs to change from vellus to terminal. Once a vellus hair has been transformed to the coarser terminal hair, it usually does not change back. Androgens also cause terminal hairs to grow faster and thicker.

Both the ovaries and the adrenals produce androgens. To some degree, estrogens and progesterone, female hormones, prevent the effect of androgens. The circumstances described below can lead to high androgen levels, which in turn can cause hirsutism.

An ovarian mass may be detected during a pelvic examination. Tests may also need to be done to make sure that tumors are not present when male hormone levels are high.
â€‹Read more- Hirsutism and how it affects your fertility
Determining the cause

When trying to determine the cause of hirsutism, several blood tests need to be done to measure androgen levels. These tests are done by radioimmunoassay in a specialised laboratory - and include levels of: testosterone; androstendione; 17-hydroxyprogesterone; and DHEA-S ( dehydroepiandrosterone sulphate). These tongue-twisters are simply the chemical names of androgens produced in the body.

Which particular hormone is increased will tip off the doctor as to where the problem lies -whether in the ovaries or in the adrenal glands. A pelvic ultrasound or special x-ray studies may also need to be done to detect ovarian or adrenal tumors. Hormone suppression or stimulation tests which further evaluate the function of the ovaries and adrenal glands may also be required.

During these tests, blood is measured for hormone levels both before and after the administration of a specific hormone medication. For example, the ACTH (adrenocorticotropic hormone) stimulation test is conducted in order to check for the presence of late onset adrenal hyperplasia.

Of course, the priority will be to correct the problem of infertility - thus for example, if the problem of hirsutism is due to anovulation due to polycystic ovarian syndrome , the primary goal will be to induce ovulation.

Low doses of steroids called dexamethasone or prednisone may also be prescribed if the adrenal gland is overactive. This medicine is usually taken at bedtime and serves to suppress production of the ACTH hormone which stimulates the adrenal gland.

Hormone treatment may prevent new hairs from developing. However, it usually takes many years for the excess hair to develop, and a significant decrease in the rate of hair growth will not be seen for at least six months of hormone treatment. Once a hormone treatment has proven to be effective, it may be continued indefinitely. However, terminal hairs that are already present will not fall out or disappear with hormonal therapy and must be removed by other means.

For temporary hair removal, many women with mild hirsutism pluck the unwanted hairs. Waxing, another alternative, is essentially the same as plucking.

Depilating agents are chemicals that dissolve the hair shafts on both facial and body hair and may also be used to remove unwanted hair. These chemicals can cause irritation and facial skin is particularly sensitive.

Shaving is probably the simplest and safest temporary hair removal procedure. Although frequently required, it is virtually painless and seldom has side effects. Contrary to popular belief, shaving does not make hair grow faster. An electric razor produces less skin irritation than a blade.

Electrolysis is the only permanent way to remove unwanted hair. During this procedure, a very fine needle is placed next to the hair shaft into the follicle. A mild electric current is sent through the needle and permanently kills the hair follicle. It is not possible to use this technique to remove hairs from very large areas of the body because each hair must be treated individually.

In addition, the technique, although quite effective, is expensive, time consuming, and moderately uncomfortable. If hormonal therapy is being started, it is best to delay electrolysis for at least six months so that the growth of new terminal hairs will be reduced.

The latest cosmetic technique to remove hair uses a laser to kill the hair follicles very precisely, and this is now becoming increasingly popular. Laser depilation is speedy, relatively painless, efficient and possibly permanent. A Ruby Laser produces red light which is highly absorbed by the melanin pigment in the hair and only minimally absorbed in skin. This means that the hair is selectively targeted by the light and hence destroyed without any damage to the skin around the hair follicle.