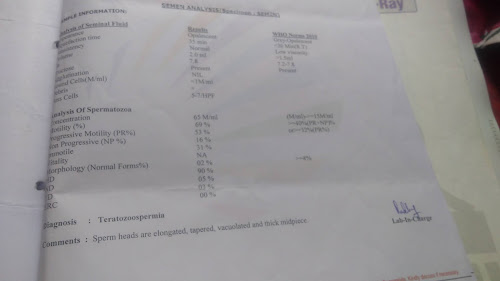 A patient emailed me his semen analysis report for a second opinion. He was very upset because his doctor had told him that he had male factor infertility, based on this report, which showed a large number of abnormal sperm forms ( abnormal sperm morphology, the medical term for which isteratozoospermia). He said that this was the reason for their infertility , and was advising them to go in forIVF/ICSItreatment immediately. I told him that this was quite clearly an unreliable semen analysis report from an unreliable lab. He was upset, because he said But this is the leading IVF clinic in my town !

I told him that any lab which reports on sperm morphology so badly is clearly a bad lab !

Many IVF labs have started taking patients for a ride by reporting a large number of abnormal forms , and thus pushing them into doing IVF/ICSI, and maximising their profits by artificially inflating their workload. This is because it is difficult , complicated and expensive to report sperm morphology correctly. The sperm need to be stained with a special stain, the technician has to carefully analyse the shape of at least 100 individual sperm before giving a final report .

Sadly, most IVF labs these days take shortcuts, and their technicians are being told to report all the semen analysis reports as having a large number of abnormal forms , so that the doctor can then advise their patients to do IVF/ICSI.

If your semen analysis report says you have teratozoospermia , then insist that they provide you with the stained slide . If they don't do this , it means they have not bothered to check the sperm morphology properly , and you can't trust them . Please run away from that IVF clinic as fast as possible , and find an independent Pathology Laboratory , and repeat your semen analysis there,because hopefully they don't have a vested interest in trying to cheat you by creating work for themselves .

If you want to see how sperm morphology is tested in a good lab, check outhttp://www.fertaid.com/fertaid/FertAid_ImageReview.asp?UR=4