How we check if your frozen Blastocysts are live before transferring them ? - Dr. Sai, Chief Embryologist, Malpani Infertility Clinic Pvt. Ltd.

We routinely use Vitrification Technique to rapidly freeze Blastocysts for all our Patients.

When you come back for your Embryo Transfer , we thaw 1 blastocyst at a time, and then transfer this back to your uterus. Thawing and transferring just 1 blastocyst allows us to extend the number of chances that you have to get pregnant with just one fresh Egg Collection and ICSI/IVF procedure. This increases your cumulative conception rate, and maximize your chances of getting pregnant.

Freezing (Vitrifying ) Blastoycsts are often considered challenging due to their Size, Structure and presence of Blastocoelic Cavity.

We have been vitrifying Blastocysts for many years now , and we routinely get a 100% Survival rate when we thaw them

When we freeze, the Expanded blastocysts are artificially collapsed using a laser pulse , to remove water from the blastocyst. This dehydration process is important as it Eliminates the risk of ice crystal formation completely, which can harm the cells . 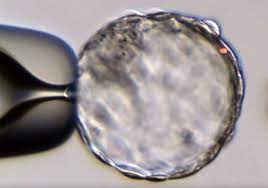 When we artificially collapse the blastocyst by giving a laser pulse between the 2 trophectoderm cells, the water comes out and all the cells shrink, which makes the vitrification process easier as it reduces the exposure time to the cryopectants.

Hence , when we vitrify the blastocysts , they are usually in a collapsed state during cryostorage . When we thaw them, they remain collapsed during the thawing process and then slowly re-expand with few hours of incubation post thaw. 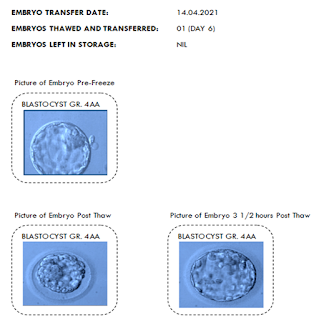 As you can see in the picture, the blastocyst which was fully expanded before freezing, was artificially collapsed before being vitrified. It remained collapsed post thawing . We then allowed it to remain in culture in the incubator at 37 C. During this time, it expanded back fully after a few hours of incubation. The re expansion usually takes about 1 hour. but usually the blastocysts are incubated for 3-4 hours before transferring them, to allow them to recover from the process of thawing.

The fact that the blastocyst has re-expanded is convincing proof that these cells and viable, and this is a healthy blastocyst, which has a good chance of implanting. Today, sadly many clinics fool patients by transferring blastocysts which have died after the thaw. Please dont let your doctor fool you !