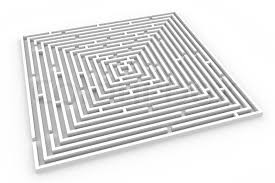 Dr Margarete Sandelowski, Professor at University of North Carolina at Chapel Hill, has done some very exciting work in exploring how couples cope with their infertility.

She observed that infertile couples often find that they are trapped in a maze; and they exhibit 6 patterns of pursuit in their quest to exit the maze. These are:

This research describes the behaviour of infertile couples so well, that it's a shame mazing has not receive more exposure in the infertility literature. In this article, I have summarized her findings, which she has described in greater detail in her very well-written book, With child in mind: Studies of the personal encounter with infertility. (1993) Philadelphia, PA: University of Pennsylvania Press.

The "sequential tracking" pattern occurs when couples exhaust one option before they start another, such as trying a variety of treatment options in sequence for a number of cycles. When pursuing medical treatment , couples move from simpler, less intrusive, and less high -tech procedures to more technically complex ones.

For example , some will do 4 cycles of IUI, before moving on to the next step, which is IVF (In Vitro Fertilization). Importantly, there is no one sequential tracking scenario. Some couples found out quickly what their fertility problem was, some couples moved quickly to more complex diagnostic or therapeutic techniques.

Other couples moved slowly as problems were found that turned out to be "minor", "insignificant", "borderline", or unresponsive to initial treatment efforts. What distinguishes tracking is the orderly step-by-step move from one previously untried procedure to the next.

A second pattern of pursuit is "backtracking", in which couples restart a diagnostic or treatment plan when they changed their doctor; or return to a previously attempted treatment or adoption option. Couples also backtrack when their physicians felt that a procedure had been improperly done or when their physicians did not have the results of a previously conducted test, or when a factor that can change over time, such as sperm quality and quantity, mandated that it be evaluated again. In all these variations of backtracking , couples moved over ground previously traveled.

A third pattern of pursuit is "getting stuck" .Seeing , believing, or being encouraged by their physicians that persistence paid off, couples who got struck in a treatment groove attempted the same regimen over and over and over again - though they have often crossed the point of diminishing returns. This is sometimes because they cannot afford more aggressive treatment options, and are not willing to consider other alternatives. These couples are often optimistic about succeeding the "next " time.

A fourth pattern of pursuit is " paralleling", or the attempt to pursue actively and simultaneously multiple tracks to parenthood, as opposed to simply "thinking about", or looking into" another track should the current track fail to lead in to a child. Often exhibited by couples who are "in a panic" and "desperate", paralleling is a means to "maximize the options" while minimizing the time wasted in pursuit.

Feeling pushed to the wall, paralleling couples decide " not to close any doors," "to keep the options open," "to keep our irons in the fire," and most significantly, "to never give up". These couples thus attempted to navigate several paths at the same time, pursuing additional paths as they opened up.

A fifth pattern of pursuit is " taking a break" There are many reasons for this, including financial constraints, the need to recover from failure and loss , and fatigue and frustration of pursuit itself. Taking a break allows couples to re-assess their goals, and recapitalize their waning financial, physical , and psychic reserves for the continued pursuit of a child .

The sixth pattern of pursuit is " drawing the line". Couples drew the line at different points in time, depending on when they become " fed up" with , or were no longer willing to invest in, "doing " infertility . In contrast , there were women and couples who had still not drawn the line after five , ten, and even seventeen years of pursuit.

What about you ? Are you following an intelligent path in your pursuit of a child or are you stuck in a dysfunctional pursuit pattern ? Use this research so you can find your own way out of the infertility maze !

Read more- Why me? The Infertile Patient's Plaint

Dr Margarete Sandelowski, Professor at University of North Carolina at Chapel Hill, has done some very exciting work in exploring how couples cope with their infertility.