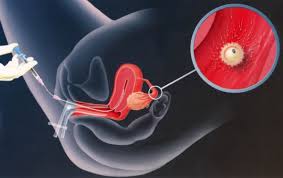 Sometimes nature needs help to start a pregnancy - and the doctor can do this by giving the sperm a piggy back ride through a fine tube into the body. This procedure is called intrauterine insemination (IUI) or artificial insemination with husband's sperm (AIH).

from the book How to Have a Baby: Overcoming Infertility
by Dr. Aniruddha Malpani, MD and Dr. Anjali Malpani, MD.

Sometimes nature needs help to start a pregnancy - and the doctor can do this by giving the sperm a piggy back ride through a fine tube into the body. This procedure is called intrauterine insemination ( IUI) or artificial insemination with husband's sperm (AIH) - and effectively, the doctor is giving nature a helping hand by increasing the chances of the egg and sperm meeting.

IUI is useful when:

It is NOT useful is men with low sperm counts or poor sperm motility , because their sperm are functionally not competent.

There are various methods of doing AIH (artificial insemination by husband). The crudest and simplest technique involves simply injecting the entire semen sample into the vagina by a syringe. However, this is a waste of time if used for treating an infertility problem - after all, why go to a doctor to do something which you can do for yourself at home?

Remember, a syringe is no better than a penis. It is only useful if the reason for doing AIH is the inability of the husband to ejaculate in the vagina. However, a number of doctors still use it as they do not offer anything better.

A refinement of this technique is that of using a spilt ejaculate. The first squirt of semen which gushes forth during ejaculation is richest in sperm. This is because the sperm "surf" on the wave of the seminal fluid which carries them forward to the outside world. The man masturbates into a 2-part container, so that this first part goes into one container, while the rest goes into another.

This is not as difficult as it sounds, and gets easier with practice! The first bottle is saved and the contents used for artificial insemination. This method is suitable for a small proportion of cases (for example, for the uncommon problem of a large volume of semen, which "dilutes " the sperm; or where laboratory facilities for sperm processing are not available).

In this method, the sperms are removed from the seminal fluid by processing the semen in the laboratory and they are then injected directly into the uterine cavity. It is not advisable to inject the semen direct into the uterus, as the semen contains chemicals (prostaglandins) and pus cells which can cause severe cramping; and even tubal infection.

Timing the IUI is very important - it must be done during the "fertile period" when the egg is in the fallopian tube. Pinpointing the time of ovulation accurately using either vaginal ultrasound or ovulation test kits is crucial. A good clinic should provide this as a 7-day week service, since there is a 1 in 7 chance that ovulation will occur on a Sunday - eggs don't take a holiday! Often the wife's fertility potential is also simultaneously increased by drugs so that she produces more than one egg per cycle (superovulation) to increase the chances of conception.

Studies have shown that the success of IUI depends upon how well superovulation is done. This can be done with the help of oral medications, such clomiphene or letrozole; or using HMG injections. Using injections has a higher success rate, but they do cost mor.

The IUI is done either when ovulation is imminent or just after. The husband masturbates into a clean jar - preferably in the laboratory or clinic itself, and after at least three days of sexual abstinence to get optimal sperm counts.

No special bed rest is required after the IUI. Some doctors may repeat the insemination after 24 hours. We usually encourage our patients to have intercourse on the night of the IUI, and for 2-3 days after this as well, to maximize the chances of the sperm and egg meeting.

Sperm processing allows the doctor to concentrate the actively motile sperms into a small volume of culture fluid. Sperm do not remain alive in the culture medium for very long unless maintained at the right conditions - hence a prompt insemination after sperm processing is important. This is why processing should preferably be done in the clinic itself, so that time is not wasted in transporting the sperm after the wash.

There are different methods of processing the sperm, and all of these require special laboratory expertise.

Of late, doctors have tried adding various chemicals to the washed sperm to try to improve their motility, so as to increase the chances of their reaching their goal. These chemicals include caffeine and pentoxyfylline and they may be helpful in some patients.

Today, with specially designed catheters ( Jansen-Anderson catheter sets), it is possible to do this in the doctor's clinic. Thus, the processed sperm can be injected directly into the tubes under ultrasound guidance, without anesthesia or surgery! This is an intratubal insemination - also known as a SIFT - (sperm intrafallopian transfer).

Men may feel a loss of self-esteem because they feel that they need a doctor's help to do what a "normal man" should have been able to do by himself. They also feel guilty about having to subject their wife to the pain and intrusion of insemination. Women may feel anger towards their husbands for having the fertility problem. The insemination may also make patients feel that someone has "intruded" into their sex life and this may affect their intimacy.

The success rate of IUI depends upon several factors. First of all the cause of the infertility problem is important. For example, men with normal sperm counts who are unable to have intercourse have a much higher chance of success than patients who are undergoing IUI for poor sperm counts. In addition, female factors play an important role.

If the woman is over 35, the chance of a successful pregnancy is significantly decreased. Generally, the chance of conceiving in one cycle is about 10 %; and the cumulative conception rate is about 30% over 3 treatment cycles. (Remember, Nature's efficiency for producing a baby in one month in fertile couples is only about 15 to 25 %). However, if IUI is going to work for a couple, it usually does so within 4 treatment cycles. If a pregnancy has not resulted in this time, the chances of IUI working for them are very remote, and they should stop persisting with IUI and explore other possibilities.

In fact, most of the infamous cases of high-order multiple births ( such as sextuplets and octuplets) have occurred after IUI

The cost of performing IUI varies from clinic to clinic, but is about Rs 5000 to Rs 10000 for the entire treatment cycle. Of course, if gonadotropin injections are used for superovulation, the treatment then becomes much more expensive - and can be as much as Rs 25000 for one month's treatment.

IUI is a simple, inexpensive, effective form of therapy, and can usually be tried first in some patients, before going on to more expensive and invasive options. However, it can be very stressful and close cooperation between the husband and wife (and the doctor) is essential!