Pregnancy fathered by a man with testicular failure

To help men with Azoospermia have a baby with their own sperm, testicular sperm is collected directly from the testes. This is called Testicular Sperm Extraction with ICSI (TESE-ICSI ).

This is a guest post by Dr. Sai, Senior Embryologist at Malpani Infertility Clinic

The collection of testicular sperm directly from the testes allows us to help men with azoospermia to have a baby with their own sperm ! This is called testicular sperm extraction with ICSI ( TESE-ICSI ). It's easy to find sperm in men with obstructive azospermia, because their testes produce sperm normally. However, it can be very challenging to find sperm in men with non-obstructive azoospermia who have partial testicular failure, because sperm production in these men is very patchy.

When doing a testicular biopsy, there is sometimes some bleeding, and often the testicular tissue which the surgeon hands over to the lab is blood stained. When these samples are processed in the lab to recover the testicular sperm, it's extremely difficult to identify viable sperms , because the RBCs obscure the field completely.

Read more- What is Azoospermia

TESA
This is the protocol I use for processing testicular tissue for TESA at our centre:

Here's a case study of a very challenging patient we treated recently. He had non-obstructive azoospermia, with small testes ( volume of 6 ml); and a FSH level of 18.2 mIU/ml. During the treatment cycle, our andrologist, Dr Vijay Kulkarni, took 6 microbiopsies from each testes on the day of egg collection.

Because the tissue was blood stained, it was very difficult to identify the sperm. This is why the tissue suspension was treated with RBC Lysis Buffer as per the protocol mentioned above, to remove the RBCs.This improved visibility dramatically, and it now became possible to identify a few testicular sperm.

In the picture below, you can see the injection pipette picking up a single sperm. Note that the background is full of other testicular cells, which emphasizes the fact that finding testicular sperm requires a lot of expertise and patience ! Also note that there are very few RBCs ( the circular cells with a central halo) in this field. 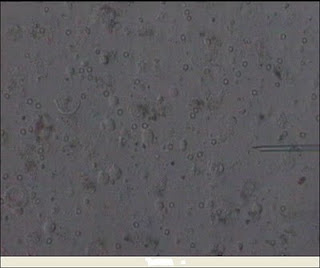 To help men with Azoospermia have a baby with their own sperm, testicular sperm is collected directly from the testes. This is called Testicular Sperm Extraction with ICSI (TESE-ICSI ).