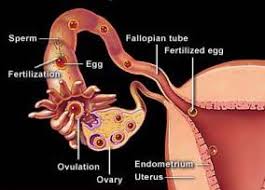 On an average, in a normal woman the ovaries will produce eggs until the age 51, which is the average age of natural menopause. In some women, the ovaries stop functioning much earlier. This is called premature ovarian failure. Most women with POF will have irregular menstrual cycles. Initially, these are light or infrequent; and soon stop completely. The age of onset can be as early as the teenage years but varies widely.

If a girl never begins menstruation, this is called primary ovarian failure. The age of 40 was chosen as the cut-off point for a diagnosis of POF. This age was chosen somewhat arbitrarily, as all women's ovaries decline in function over time.

POF is diagnosed by finding abnormally low levels of estrogen and high levels of FSH, which demonstrate that the ovaries are no longer responding to circulating FSH by producing estrogen and developing fertile eggs. On ultrasound scanning, the ovaries are small ( atrophic) with a very low antral follicle count. Women suffering from POF usually experience menopausal symptoms, which are generally more severe than the symptoms found in older menopausal women.

The symptoms vary from patient to patient and the disorder may occur abruptly or spontaneously or it may develop gradually over several years. Women may experience hot flashes, night sweats, irritability, moodiness, sleep disturbance, decreased libido, hair coarseness and vaginal dryness.

In most patients with POF , the cause cannot be determined:

Serum follicle-stimulating hormone (FSH) measurement can be used to diagnose the disease. Two FSH measurements with one-month interval have been a common practice. Because the eastradiol levels in patients with POF are low, the FSH levels are very high. The typical FSH level in POF patients is over 40 mlU/ml (post-menopausal range). Many women get confused with their FSH levels.

They feel that the high FSH is the cause of the POF; and if this can be treated, then their problem with get solved. The fact is that while it's very easy to suppress the high FSH level back to the normal range by using estrogen tablets, this will not help the patient with POF to grow eggs or to have a baby.

Often the diagnosis comes as a rude shock - both to the patient and the doctor. Most young women have irregular periods because of another disorder called PCOD, which is much commoner. Many doctors assume that a young woman with irregular periods have PCOD, as a result of which the correct diagnosis of POF is often missed for many years.

The cessation of menstrual periods is often incorrectly attributed to a variety of conditions, such as stress, without appropriate testing or consideration, delaying the diagnosis even further. In addition, many women who are affected by POF may have been incorrectly treated for irregular bleeding with oral contraceptives, which may have masked symptoms. All too often, POF is not diagnosed until the woman becomes interested in fertility and the oral contraceptives are stopped when the patient wants to conceive.

Currently no fertility treatment has been found to effectively increase fertility in women with POF. While some women with POF can and do become pregnant on their own, this is unpredictable and uncontrolled. Medically, the best treatment option is the use of donor eggs.

While it can be very difficult for young women to come to terms with the fact that they may have to use donor eggs to have a baby, the good news is that this option has a very high success rate in patients with POF. Other options include: embryo adoption; childfree living; and adoption.

Patients with POF have low estrogen levels and this can result in painful sex ( because of lack of vaginal lubrication); as well as osteoporosis. Hormone replacement therapy ( HRT) with estrogens and progesterone can help to deal with these problems very effectively. However, while HRT can help women with POF to have regular cycles, it will not help them to have a baby !

Many women find this very confusing, because they feel that if the medications can help them to have regular periods, they should be able to help them to have a baby as well. Sadly, the woman with POF has no eggs left in her ovaries, which means we cannot help her to grow these.