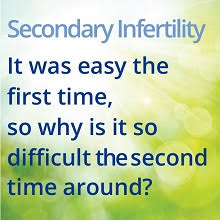 For most people, infertility conjures up the image of a couple without a child. But what about the couple who has borne a child, and now wants to extend their family but find they are unable to do so?

Secondary infertility, is the inability to conceive after one or more successful pregnancies. The medical causes are similar to those of primary infertility, and include sperm problems, tubal factors, endometriosis, and ovulation difficulties. However, there are differences. For one thing, the couple is older, which is why time is at a premium!

Moreover, there are emotional aspects that are unique:

Many couples with secondary subfertility choose never to take medical treatment; often, this is because they are unsure about whether they do have a problem - and they keep on trying, hoping to hit the jackpot once again (after all, if they could do it once, why can't they do it again?)