Test Tube Baby – The IVF Story, Then and Now 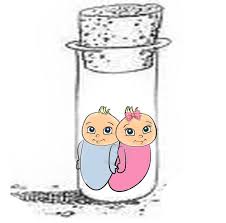 The ill begotten term 'test tube baby', which is no longer used to refer to babies born out of in vitro fertilization, is now no longer used casually. The term was once used to indicate the marvels of science, and the great feats it was capable of performing. To have been able to create the cells of a baby in a laboratory was something unimaginable just a few years before the first baby was born from the IVF procedure.

In 1978, Louise Joy Brown, the world's first test tube baby was born and becasme instantly famous. This was not only because she was conceived in a petri dish in a laboratory, but also because her parents were condemned  by religious communities all over the world as well as naysayers who saw the birth of Louise as an unsavory precedent.

The birth of Louise was celebrated in some quarters. The scientific community generally rejoiced at this triumph. Louise's parents, Lesley and John, who had been struggling with infertility for nine years before they finally had Louise, were also elated.

However, there was a section of society and the science fraternity that was concerned over the possibilities of ill use of this technology in the future. Even at that time, Lesley Brown's pregnancy offered hope to thousands of couples, who had trouble conceiving.

There were ethical questions though. The big question that everyone asked was if Louise would be a healthy baby. Since she was the first baby born out of IVF, it was not clear, if the in vitro fertilization had altered the baby's genetic code or if the baby was going to be any different.

Creationists, of course, were furious over this new development, raging that humans were not intended to meddle with mother nature's ways and that this kind of meddling would have very dire repercussions.

Social and Ethical Issues of IVF

A lot of fertilized eggs were also discarded, when they were considered unusable after the IVF treatment. The huge question staring at them was – when does life begin. If it indeed begins at conception, the discarding of unused fertilized eggs may amount to murder. Could this possibly lead to breeding farms and the human involvement in reproduction be completely overshadowed?

The Treatment of Choice

These were the questions that the doctors grappled with the heralding of the first test tube baby. Almost 40 years later IVF has become a treatment of choice for thousands of infertile couples from all over the world. These couples find hope in this treatment and may even finally be able to fulfill their dream of parenthood.

A test tube baby may be considered a triumph for science, but there once was a time when the procedure was regarded with a lot of suspicion.