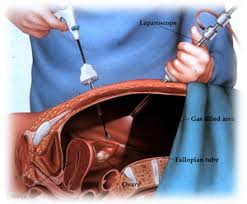 The likelihood of surgical success of tubal surgery in terms of pregnancy, depends on the severity of the tubal damage. Since the results of surgery have not been encouraging, nowadays, many patients are advised to undergo IVF (in vitro fertilization) as their first treatment option instead of surgery.

Once the doctor has assessed the damage and pinpointed the location of the blockages he will decide on treatment alternatives and how to proceed. The first choice in the past used to be an attempt at surgery to repair the tubal damage. However, because results with tubal surgery were not very encouraging, many patients with tubal damage are now advised to undergo IVF (in vitro fertilization) as their first treatment option.

In order to select between IVF and tubal surgery, we need to differentiate between intrinsic tubal damage and peritubal damage. If the tubes have been damaged because of a problem outside the fallopian tubes, such as peritubal adhesions or endometriosis, which have caused the tubes to get kinked, then surgery may be useful.

The likelihood of surgical success (in terms of pregnancy), depends on the severity of the tubal damage. If a previous infectious process has caused scarring of the fallopian tube, the inner delicate lining may have become irreversibly damaged.

All operations can result in re-establishing patency in some cases - but the main aim of the surgery is not to just open the tubes, but to achieve pregnancy - and the tubes have to become capable of capturing the egg and transporting it to the uterus for this to happen. Unfortunately, surgery cannot reverse tubal damage once this has occurred.

What if only one tube is blocked?

One normal tube is sufficient to allow a pregnancy - and most surgeons would not advise tubal surgery for these patients. Obviously, the chances of pregnancy for such patients is half that of normal women and therefore establishing a pregnancy may take twice as long. The danger of trying to surgically repair a single blocked tube is that adhesions because of the surgery may cause both the tubes to become blocked !

Microsurgery entails the use of the following surgical techniques:

The microsurgery operation may take from 1 to 4 hours. Depending on the extent of pelvic damage and is usually done under spinal or general anesthesia. The incision used is usually a "bikini cut" (Pfannensteil incision) The length of stay in hospital is usually 3 to 7 days. Tubal microsurgery can be expensive and may cost up to Rs.40,000. Sometimes a "check or second-look laparoscopy " is performed about one week after surgery to ensure that tubal patency is maintained and to remove any small adhesions that may have started to re-form.

The tubal obstruction could be at the uterotubal junction and this is called a cornual block. The conventional surgical repair of cornual blocks involved reimplanting the tube into the uterus - and had dismal success rates.

However, with microsurgery, it is possible to see the very fine ends of the tubes under high magnification and to join them together. This has a pregnancy rate of a bout 50%, since the function of the rest of the tube is basically intact.

Recently, doctors have realized that a number of patients have cornual blocks because of the presence of mucus plugs and debris in the very fine cornual segment of the tubes. Newer nonsurgical methods have now been devised to treat this. These involve the passage of a fine guide wire or a fine balloon into the cornual end of the tube through the uterus.

This is called a "balloon tuboplasty" or "cornual recanalisation," and can be done under ultrasound guidance; hysteroscopic guidance; or fluoroscopic (X-ray) guidance. This is a significant advance, since it saves patients the need for major surgery; and also has excellent pregnancy rates.

If the damage is less severe (fimbrial agglutination, in which the fimbriae are stuck to one another; or phimosis, in which the tube is narrowed, but open), then surgical repair is more successful, with pregnancy rates being about 50%.

The risk of having an ectopic (tubal) pregnancy is increased following tubal surgery. Fallopian tubes which have been operated on may have a damaged inner lining, and this can impair the movement of the embryo down the tube. This is why, in patients who have had tubal surgery, the diagnosis of a pregnancy should be made as soon as possible (preferably within a few days of missing a menstrual period), to rule out the possibility of an ectopic pregnancy.

The best chance of achieving a pregnancy is in the first few months after surgery, and most women who are going to get pregnant after tubal surgery will conceive within this time. Some doctors believe that using ovulation induction and / or intrauterine insemination after tubal surgery helps to maximize the chances of a pregnancy.

If the patient has not conceived within one year after the surgery, then follow-up testing in the form of an HSG and / or laparoscopy is advisable, to determine whether the fallopian tubes are still open.

If the first surgery has been unsuccessful, the chance of success as a result of reoperation is very low, and IVF (In Vitro Fertilization) is the only treatment choice for such patients. In the future, it is possible that tubal transplants may become a reality and that scientists may also develop artificial synthetic tubes to replace damaged ones.

With operative laparoscopy, it is now possible to open damaged tubes through the laparoscope, thus saving the patient major surgery. A hydrosalpinx can be repaired by opening it with a laser or cautery and then keeping it open with sutures: and even the complicated operation of tubal reanastomosis has been performed by experienced surgeons through the laparoscope (using sutures or special adhesive glue).

In women, sterilization for family planning is usually done through an operation called tubal ligation, which is usually carried out through the laparoscope. The aim of the operation is to block the tubes and prevent the sperm and egg from meeting each other.

Why Do Women Ask for Reversal?

The vast majority of people are very happy with sterilization. Nevertheless, there are a few women who are very distressed afterwards and would do almost anything to get things undone. The commonest reason why such women regret sterilization is because their child dies or because they have remarried and wish to bear their new husband's child.

What Can Be Done?

If there is a reasonable amount of tube remaining, even if only on one side, then it may be possible to perform tubal microsurgery to rejoin the tubes. On the whole, the more tube which has been left undamaged, the better the chances of success.

Thus, patients who have had a tubal ligation done through the laparoscope, using Falope rings (silastic bands) or clips, have an excellent chance of achieving a pregnancy after microsurgical reversal of the ligation, because these methods cause minimal tubal damage.

After reviewing the operative notes, a laparoscopy may be advised, so that the exact state of the fallopian tubes can be assessed. If the patient has enough normal tube, tubal microsurgery may be attempted and pregnancy rates can be as high as 75% in favorable cases. If, unfortunately, the patient has had both tubes completely removed or if the tubes are very badly damaged, then the only chance of success will be with IVF (In Vitro Fertilization).