How is ultrasound (sonography) used for treating infertility ?

Ultrasound or sonography has helped revolutionize our approach to the infertile patient. Ultrasound machines are a very useful  and help the doctor "image" or see structures in the female pelvis. Ultrasound uses high frequency sound waves much like SONAR machines used in ships for detecting submarines underwater.

The high frequency sound waves are bounced off the pelvic organs; and the reflected sound waves are received by the probe ( transducer) and a computer is used to reconstruct the waves into black and white images on the monitor. Ultrasound machines today are all real-time machines, which give dynamic images.

What can you see on ultrasound?

How is ultrasound used for follicular scanning to monitor
ovulation ? 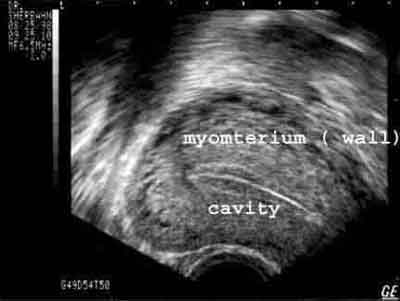 Fig 2. Ultrasound scan of the uterus, showing a normal endometrium, which appears as a triple band in the center of the uterus

What if an ovarian cyst is found on ultrasound scans ?

One of the commonest findings on an ultrasound scan is an ovarian cyst. A cyst is a collection of fluid surrounded by a thin wall (a fluid-filled sac) that develops in the ovary. Typically, ovarian cysts are functional (not disease-related) and disappear on their own. During ovulation, a follicle may grow , but fail to rupture and release an egg. Instead of being reabsorbed, the fluid within the follicle persists and forms a follicular cyst.

The other type of functional cyst is a corpus luteum cyst, which develops when the corpus luteum fills with blood. Functional ovarian cysts usually resolve on their own, and are not to be confused with other pathological conditions involving cystic ovaries, specifically polycystic ovarian disease, endometriotic cysts, or ovarian tumours.

Since an ultrasound picture is just a black and white shadow, the doctor has to be skillful in interpreting what the image means. Simple cysts are thin walled, and appear as a large black bubble. Cysts which contain blood ( for example, chocolate cysts found in patients with endometriosis) will have echoes within them, which appear white, and these are described as complex masses on ultrasound.

The incidence of follicular cysts is increased in infertile patients taking fertility drugs (such as clomiphene and HMG) for ovulation induction. Functional ovarian cysts usually disappear within 60 days without treatment. However, if the cyst is larger than 6 cm, or persists for longer than 6 weeks, then further testing may be needed.

Who should do the ultrasound scans ?

Ultrasound scans can be done either by a radiologist; or by the gynecologist or infertility specialist himself. Remember that the eye only sees what the mind knows, so you must go to a good clinic for your scans. The benefit of having the scans done by the infertility specialist himself is that he can make immediate decisions regarding your treatment based on the scan findings.

If the radiologist does the scans, then you have to wait till your doctor has seen the report before knowing what to do next since the radiologist does not make the treatment decisions. In any case, it is vital that the ultrasound scans be done in the Infertility Clinic itself, so that your waiting can be minimized - and you don't have to run around from the sonographer to the gynecologist.

If there are any abnormal findings, it is vital that your gynecologist see the actual ultrasound for himself during the scan. This provides much more information than the printed pictures. Today, thanks to the magic of telemedicine, many of our patients can email the jpeg images of their ultrasound scans to us, wherever in the world they may be, so we can actually "see " the images and interpret them ourselves.

What recent advances have occurred in ultrasound ?

Ultrasound technology has made dramatic advances in recent years, and now tests have been described which allow the doctor to use ultrasound to assess tubal patency. Basically, these involve passing a fluid into your tubes through the uterus; and the gynecologist can see the passage of the bubbles into the tubes and out into the abdomen. Since this test ( sonosalpingography) can be done in the doctor's clinic itself, and does not involve X-ray radiation, it has advantages - especially for documenting that the tubes are normal.

Colour Doppler allows the doctor to "see " the blood flow in the pelvic blood vessels, mapped in color on the monitor. While still a research tool, it may provide important information for assessing the infertile patient in the coming years
While this provides excellent pictures, the true value of this technique for infertility still has to be evaluated. It can be useful in assessing women with uterine anomalies, because it helps the doctor to differentiate between a septate uterus and a bicornuate uterus.

How can ultrasound guided procedures be used to treat infertility ?

Ultrasound now also offers infertile patients newer treatment options not available before. Modern surgical techniques have progressively become less and less invasive - all to the patient's benefit ! From laparotomy to laparoscopy , and now to ultrasound guided procedures, we are witnessing a change in the gynecologist's armamentarium from the knife to the endoscope to the guided needle !

The benefits to the patient of "minimally invasive surgery" are many and include : reduced costs; reduced hospitalisation ; reduced risk of complications; and better preservation of fertility, with increased chance of conception for the future.

Ultrasound-guided procedures can be used to treat a variety of problems seen in the infertile woman:

Normally, surgery had to be done to remove these cysts - and often this damaged the surrounding normal ovary as well. With ultrasound-guidance, we can stick a needle from the vagina into the cyst, and empty the contents ( usually clear fluid ) by sucking it out. This empties the cyst, which often does not recur.
It can be treated by injecting a toxic chemical, methotrexate, into the sac, which causes the tissue to die and then get reabsorbed, without any surgery whatsoever. In more advanced tubal pregnancies, potassium chloride can be injected direct into the heart of the baby in the ectopic gestational sac, thus killing it and preventing it from growing.

The scope of ultrasound guided procedures has increased dramatically in the last few years; and with further improvements in technology, we can expect this list to become even longer, and doctors become more versatile with using this technology.

Ultrasound or sonography has helped revolutionize our approach to the infertile patient. Ultrasound machines are a very useful  and help the doctor "image" or see structures in the female pelvis.
Previous
Next
Authored by : Dr Aniruddha Malpani, MD and reviewed by Dr Anjali Malpani.