Laparoscopy ( also called endoscopy or pelviscopy) is a surgical procedure in which a telescope is inserted inside the abdomen through a small cut below the navel, so that the doctor can have a look at the pelvic organs in the infertile woman. A laparoscopy can lead to the diagnosis of many problems which cause infertility including damaged tubes, endometriosis, adhesions and tuberculosis.

When is laparoscopy done?

In the past, a diagnostic laparoscopy was a routine part of the workup in infertile women, in order to complete their evaluation. Generally, the procedure was performed after the basic infertility tests were done, since it is a surgical ( invasive) procedure. Today, however, the utility of laparoscopy in treating infertile women is very limited, and we rarely perform laparoscopies in our clinic.

Some doctors will time the laparoscopy during the premenstrual phase (the week before the next period is due). They combine the laparoscopy with a dilatation and curettage (D & C) (scraping the inside of the uterine cavity) so that they can also get information on the woman's ovulatory status in the same procedure.

Some doctors try to perform the diagnostic laparoscopy during the post-menstrual phase , when the uterine lining is thin, so that they can combine it with a hysteroscopy at the same time.

What precautions need to be taken before laparoscopic surgery ?

The patient is advised not to eat or drink anything for a specific time before the operation. Some tests may also be done before the procedure, to ensure safety for anesthesia, though for most young healthy women tests are usually not needed. Some doctors may want a HSG (hysterosalpingogram) done before performing a laparoscopy.

The surgery is usually done on a day-care basis. Laparoscopy is done under general anesthesia so that the patient remains asleep during surgery and does not feel any discomfort.

How is the laparoscopy performed ?

First of all, the abdomen is cleansed and draped for the procedure. Then an instrument may be placed in the uterus through the vagina. A gas, such as carbon dioxide or nitrous oxide or air is then allowed to flow into the abdomen just below the belly button. This gas creates a space inside by pushing the abdominal wall and the bowel away from the organs in the pelvic area and makes it easier to see the reproductive organs clearly.

The laparoscope, which is a slender tube, like a miniature telescope, is then inserted through a small incision just below the navel. During the laparoscopy a small probe is placed through another incision in order to move the pelvic organs into clear view. A diagnostic laparoscopy is incomplete without a "second puncture" because, without this second probe, it is not possible to visualize all the structures completely.

During the laparoscopy the entire pelvis is carefully scanned and the organs inspected systematically - the uterus; the ovaries; and the lining of the abdomen, called the peritoneum. In addition to looking for diseases affecting these structures, the doctor also looks for adhesions (bands of scar tissue), endometriosis and tubercles. In case abnormalities are found, the doctor can either try to correct them (operative laparoscopy), or take out bits of tissue for histologic examination (biopsy) with a biopsy forceps. A blue dye (methylene blue) is then injected through the uterus and fallopian tubes to check whether the tubes are open. When the surgery is complete, the gas is removed and one or two stitches inserted to close the incisions. Since the incisions are so small, often stitches are not needed and they can be closed with Band-Aids. 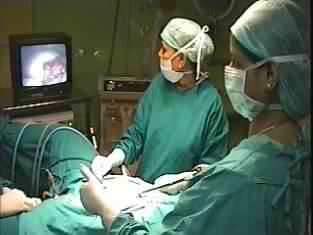 Fig 1. A laparoscopy being performed. Note that the view through the laparoscope can be seen on the TV monitor. 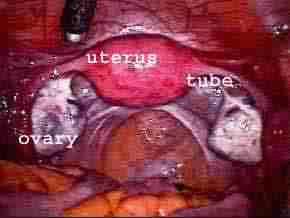 Fig 2. Normal pelvis as seen during a laparoscopy. The uterus is the reddish structure in the center; on either side of which are the pink fallopian tubes. These run towards the ovaries, which are white in colour.

As stated earlier, along with laparoscopy, some doctors carry out a dilatation and curettage (D & C) and send the endometrial curettings for histologic examination to rule out the possibility of hidden tuberculosis, and also to find out if ovulation is taking place. Others will do a diagnostic hysteroscopy at the same time, to ensure that the uterine cavity is normal.

Most doctors today use videolaparoscopy, in which a video camera is connected to the laparoscope, so that what the surgeon sees can be displayed on a TV monitor. This kind of laparoscopy can be very useful for documentation and record-keeping. It is also very helpful for patient education, since the doctors can use the video or CD later on to explain to the patient the exact nature of her problem.

Recent advances in miniaturization have allowed companies to manufacture very tiny laparoscopes. These are as thin as a needle, and are called microlaparoscopes or needlescopes. These allow doctors to perform laparoscopy in the clinic itself, without using anesthesia. However, the quality of the images is still not very good with these tiny scopes.

Dr Brosens from Belgium has also introduced the technique of transvaginal hydrolaparoscopy. This allows the doctor to examine the pelvis by inserting a tiny scope through the vagina, so that no abdominal incision needs to be made. The value of this technique as compared to conventional laparoscopy is still being studied.

What is an operative laparoscopy ?

Some of the disorders that can be corrected with the help of the procedures above include: releasing scar tissue and/or adhesions from around the fallopian tubes and ovaries; opening blocked tubes; and removing ovarian cysts. Endometriosis can also be destroyed by burning it from the back of the uterus, ovaries, or peritoneum during operative laparoscopy. Under certain circumstances, small fibroid tumors can be removed and ectopic pregnancies can be treated.

When performing operative laparoscopy, surgeons may use electrocautery instruments, lasers, and sutures. The choice of the technique used depends on many factors including the surgeon's training, location of the problem, and availability of equipment.

What is a "second-look laparoscopy ? "

Sometimes, a "second-look" laparoscopy may be recommended. This procedure is performed following either operative laparoscopy or major tubal surgery. Second-look laparoscopy can take place within a few days following the initial surgery or many months afterwards. During the procedure, the doctor determines whether adhesions are re-forming or if endometriosis is returning and these conditions can be treated in needed.

After surgery, the patient needs to rest for about 2 to 4 hours in order to recover from the effects of anesthesia. She can usually go home the same day and resume normal work in 2 to 3 days. Sexual activity can be resumed in a week or so, depending upon the doctor's advice.