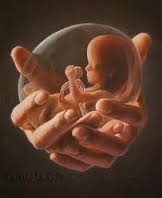 Recurrent pregnancy loss ( RPL , or recurrent miscarriages)  is one of the most frustrating problems in reproductive medicine medicine today because we still do not understand it well. Patients with repeated miscarriages have hundreds of questions - and we still do not have all the answers !

How an Abortion Starts

The medical term for a miscarriage is an abortion. Most miscarriages start with vaginal bleeding which is initially slight and painless. This is called a threatened abortion, because the pregnancy is threatened by the bleeding. This bleeding is from the mother, and is not fetal blood. About half the time this stops spontaneously and results in no harm to the pregnancy. At this stage, the most useful test is an ultrasound scan (usually done with a vaginal probe).

If a fetal heartbeat can be seen, this means that there is a 95 % chance that the pregnancy will proceed normally. On the other hand, if the ultrasound scan shows that the fetus has not developed properly ("blighted ovum " or anembryonic pregnancy when no fetus can be seen; or a missed abortion or intrauterine fetal death when the fetus is seen but the heart is not beating, then nothing can be done to save the pregnancy.

The Magnitude of the Problem

Perhaps 20-30% of all women spot, bleed or suffer cramps during their first twelve weeks of pregnancy, and about 10% miscarry. This figure may be an underestimate, because there are a number of women who miscarry unknowingly, thinking that their period was late or heavy. It is very common for women to have one miscarriage during the first twelve weeks of their pregnancy.

The commonest reason for a first trimester miscarriage is a genetic defect in the embryo. This is actually Nature's defense mechanism, to prevent the birth of a baby with a birth defect. The genetic error is a random event which happens by chance , and occurs because a genetically abnormal egg or sperm gets fertilised.

This is not a sign that they have a health problem, because most of them will probably have a healthy baby the next time they get pregnant without any treatment. This is why most doctors will not do any testing for couples who have had a single first trimester miscarriage - the testing is usually not cost effective, and rarely provides any useful information.

If however, a patient has had two or more miscarriages consecutively, this is called RPL, or recurrent pregnancy loss. The old term for this as repeated or habitual abortion. Now although the risk of miscarrying again does increase, this risk is still quite small, and increases from the 15% risk a normal woman has to about 35% - which still means there is a 65% chance that they will not have a miscarriage again. Here are some facts:

Causes of a Miscarriage

Repeated miscarriages can happen because of any of the following:

Abnormal Sperm do not Cause Miscarriages !

Human society still tends to dismiss miscarriage complacently; it is a subject which is rarely discussed. A foetus for most people is a non-person and a miscarriage is a non-event. But, to the would be parents, the developing fetus is a baby with an identity, especially if you have seen it on the ultrasound screen and heard its heart throbbing with a Doppler.

When the child is lost, it is a bereavement and your sense of loss, tinged with pain, anger, isolation and depression, can be profound - especially when it follows a long period of infertility.After a miscarriage, it is normal to experience a period of grief. Find support from each other; and from others who have had a similar experience. Healing does happen in time. Focus on getting through the grieving rather than on the suffering.

After a miscarriage, making the decision to go in for another pregnancy is difficult. Collect as much information as possible to try to find out the possible causes of the loss and whether they might influence a future pregnancy.

If you have had 2 or more miscarriages, then tests are usually done to try to find a cause. These include the following:

The doctor may also want to send the aborted tissue for chromosomal study, to find out if the fetus was chromosomally normal or not. However, this is not helpful, as it doesn't really change your treatment options.

Often many doctors will do what is called a "TORCH" test - but this is a a waste of money for most patients, since it provides little useful information.

Lots of doctors order many useless blood tests to try to make a diagnosis. Please don't let them waste your money doing this. You can read more about what the ABIM Foundation has to say about these wasteful tests at http://consumerhealthchoices.org/catalog/blood-tests-miscarriage-risk-smfm/

When to start the testing depends upon you. While most doctors would refuse to do any testing after one miscarriage (since your chance of having a healthy pregnancy even without tests and treatment is better that 85%, and all you really need is reassurance ), most would start a workup after two miscarriages, to make sure that there is no underlying correctable problem.

Often the only option for many women ( especially when there is no clear diagnosis) is to try again. Remember, even if you have had 3 or more miscarriages, your chance of carrying the next baby to term is still more than 50 % - even with no specific treatment, and just tender loving care! Deciding when to start the next pregnancy is a decision only you can make. It takes a lot of courage and both of you need to be ready.

Your next pregnancy probably won't be as joyful as you would like. Insist that your pregnancy be monitored carefully. Whenever the slightest problem occurs, you'll feel vulnerable and terrified - but don't panic

Your child birth experience can be bittersweet - memories surface about your loss, especially if you are at the same hospital. You probably will need to do some grieving in addition to celebrating the new life.

Recurrent miscarriages can be physically and mentally draining. Understanding  what the symptoms, signs and causes are, will help you deal with it  better .

Need help ? Please send me your medical details by filling in the form at www.drmalpani.com/free-second-opinion so that I can guide you !