How can you make sense of IVF success rates ?
What games do some IVF clinics play with their pregnancy rates ?
What is assisted hatching ?
What is blastocyst transfer ?
How can we simplify IVF ?

How can you make sense of IVF success rates ?

The most important question most patients have about IVF and GIFT is : What are my chances of getting pregnant ?

This is a difficult question to answer, since there are so many variables involved.

Chances of success depend upon:

Of course, there are some variables about which nothing can be done - such as the wife's age. But other variables can be controlled to try to maximize chances of a pregnancy ! The good news is that with improving IVF technology, pregnancy rates with IVF have increased dramatically.

With this in mind, the Fertility society of Australia recommends that no more than 3 embryos be transferred during any treatment cycle. Studies done the world over show that the average pregnancy rate per cycle for IVF is about 30 % for most patients; and about 30% for GIFT.

How can a patient interpret this figure ? For example, let us consider a 30 year old patient with irreparable tubal damage who goes through one IVF cycle. She can look at the pregnancy rate figure of 30 %. in two ways . A success rate of 30 % means there is an 70 % chance she will not get pregnant. On the other hand, if she takes no treatment, her chance of getting pregnant is zero . The IVF cycle has increased this to 30 % - no one can do any better than this today !

Of course, for the couple who gets a baby, it's a 100% baby - and for the one who fails, it's 0% - so for the individual patient, it's really not a question of statistics ! Each IVF treatment cycle is a bit like taking a gamble - and you need to hope for the best and prepare for the worst !

Thus, let us assume the pregnancy rate for IVF at a clinic is 30%. If 10 patients start an IVF cycle, 3 will get pregnant, leaving 7 patients. If these 7 do another IVF cycle, another 30% ( 2.1 patients - so let's say another 2) will conceive. If the remaining 5 do another cycle, 1 more will get pregnant; and at the end of the 4th cycle, 1 more will conceive; so that of the 10 patients who started, 7 will have got pregnant in 4 attempts. This is because the chances of getting pregnant in the next IVF cycle do not decrease just because a pregnancy has not occurred in the previous cycle - so the best bet would be to keep on trying.

Theoretically, we could reassure every couple taking IVF treatment that they would get pregnant - provided they were willing to go through as many cycles as were required, till they hit the jackpot ! Of course, one has to set a limit somewhere, and the decision when to stop is something which only the couple can make for themselves . After more than 6 failed IVF cycles, the chance for a pregnancy with IVF does decline.

What games do some IVF clinics play with their pregnancy rates ?

Of course, some clinics have much better pregnancy rates - and others much worse. Nevertheless, many clinics will quote inflated rates - and this can mislead patients ! Unfortunately, in India there is no central registry or monitoring of IVF clinics, so that you pretty much have to trust what the doctor tells you. In many countries in the West, the law mandates that IVF clinics provide their pregnancy rates to a central authority - thus ensuring that IVF clinics maintain high standards and quality control. This is very helpful for patients.

Different programmes define success in various ways. To most couples, success is a baby, not a pregnancy - so that what needs to be determined is the "take home baby rate" . Some clinics quote pregnancy rates when describing their success rates - and these can be considerably higher than the live birth rate , depending upon how a pregnancy is defined. Thus, some programs define pregnancy when the pregnancy test is positive; others define pregnancy as a fetus seen on ultrasound.

Most good programs today express their pregnancy rate as the number of babies born per treatment cycle, and this is the figure you should be looking at.

IVF technology is improving by leaps and bounds and many exciting advances have taken place recently. Many of these are now available in India, and these include the following.

What is assisted hatching ?

One of the major problems with IVF today is the low pregnancy rate after successful embryo transfer. The reason why such few embryos implant successfully (only 1 of 10 embryos will become a baby) is one of the things we really do not understand today. Dr. Cohen from New York believes this is because the surrounding shell of the embryo (called the zona pellucida) hardens when it is cultured in the laboratory. They therefore use "embryo surgery" called zona drilling or assisted hatching to "soften" the shell of the embryo, and they believe this helps to increase pregnancy rates by improving implantation rates, since embryo hatching ( Laser Hatching Video ) is facilitated. In the past, this was done using an acid (acid Tyrode's) , but is now done with a laser, which is much safer because it is more precise. 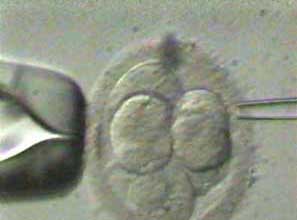 Fig 1. Assisted hatching. The embryo is held securely, and a carefully controlled stream of acid is blown through a fine pipette in order to drill a hole in the zona (shell). If you click on the picture, you can watch a video of how we do a laser-assisted embryo hatch in our clinic

Embryo surgery has also been used for embryo biopsy, for preimplantation genetic diagnosis, in which single cells are removed from the developing embryo, to make sure the embryos are healthy and have no genetic disease. This is described in more detail in Chapter 26.

Embryo multiplication, by removing some of the cells from the embryo and allowing them to divide, can allow doctors to "multiply" the number of embryos formed in vitro. The new embryos can then be coated with a new shell ( zona) and then transferred into the uterus. This could help to increase the chances of pregnancy is women who can produce only a small number of embryos.

Other scientists feel that the reason for the poor implantation is the poor quality of the embryo cultured in vitro. They have therefore tried to improve embryo quality in the laboratory by trying to provide it with more natural ( "physiological") culture conditions. This is done by a method called co-culture in which the embryo is cultured along with "feeder cells" in the culture dish . 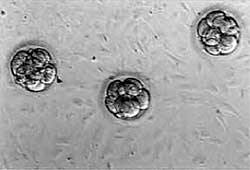 Fig 2. Embryo co-culture. Embryos are grown on a bed of cells which nurture the embryos.

These cells provide the embryo with the extra nourishment they need for better growth. Better pregnancy rates are claimed with co-cultured embryos as compared to embryos grown under traditional IVF conditions.

Some patients going through IVF grow lots of eggs, but persistently form poor embryos which fail to implant. In some of them, this may be because they have a problem in their cytoplasm ( the area within the shell of the egg that lies outside of the nucleus ) - either in their mitochondria or the cell-division apparatus . Dr Cohen hypothesised that it should be possible to correct this problem by replacing just the cytoplasm of the egg, instead of the whole egg, thus keeping the mother's own genetic contribution ( the DNA contained in the nucleus) to the baby intact. This high-tech method is called cytoplasmic transfer, and uses cytoplasm donated from the healthy eggs of another woman.

What is blastocyst transfer ?

The formulation of new laboratory culture media - the liquid in which the embryo is grown in vitro - has made it possible to "grow" embryos in vitro beyond the typical 2 to 3 day state of development , till they become blastocysts. A blastocyst is the final stage of the embryo's development before it hatches out of its shell (zona pellucida) and implants in the uterine wall.

Initial studies suggest that transfer of the embryo on day 5, at the blastocyst stage, may yield higher pregnancy rates. There may be two possible reasons for this. Firstly, transfer of the blastocyst to the uterus may be more physiologically appropriate , since this mimics nature more closely, so that the implantation rate may be higher. Also, waiting till the blastocyst stage allows the doctor to select the "best " embryos, since unhealthy embryos are likely to die ( arrest) before they reach this stage.

In our clinic, we do blastocyst transfers routinely, as they have a better pregnancy rate. This is true even for patients with poor ovarian reserve - even if they have only 1-2 eggs.  Yes, if there are few eggs, there is a very real risk that none of them may develop to the blastocyst stage. All of them may "arrest" in vitro, so that there are no embryos available for transfer. This can be heart-breaking for the patient, but it;s better that the embryo arrest in vitro, rather than subjecting the patient to a pointless, nerve-wracking 2ww. Of course, this protocol can only be followed in a Grade A IVF lab, which is confident of growing blastocysts. Every patient needs to balance these risks and benefits , depending upon the clinic's experience and success rate. Read more at https://www.drmalpani.com/knowledge-center/articles/blastocyst

You can see what blastocysts look like at www.drmalpani.com/blastocystimages Fig 3. A beautiful blastocyst on Day 5.

How can we simplify IVF ?

Some people might ask whether all this is relevant to Indian conditions. While these technologic refinements are very exciting, IVF clinics in India should also focus on simplifying IVF technology - so that it can be made more affordable for the average Indian couple. Advances which have occurred which have helped to simplify IVF and make it more easily available include the following.

Intravaginal culture: This is a technique for IVF , which provides the same rate of fertilization which conventional IVF does, at a fraction of the cost. In this method, which was first described by Dr. Ranoux of France in 1984, the eggs and sperm are placed in a sterile vial which is then sealed and placed in the woman's vagina. Thus, the woman acts like her own incubator, since she keeps her eggs and embryos at body temperature. Since expensive laboratory equipment is not needed, this is much cheaper - and as effective as conventional IVF !

Natural cycle IVF: Natural cycle IVF is much less expensive because it does away with the high expense of gonadotropin injections used for superovulation. In this method, the single egg which the woman grows in her unstimulated ovulatory cycle is used for IVF. While the pregnancy rate is lower, the expense (and the stress of IVF) is much less ! Interestingly, "gentler" IVF is becoming increasingly popular in the West as well. Many doctors are very critical of the large amounts of hormones which are being used in traditional IVF in order to produce large quantities of eggs. Gentler ovarian stimulation ( using only clomiphene or smaller doses of HMG) has also become popular once again, since it reduces the risks of complications, such as ovarian hyperstimulation and multiple pregnancy.

Transport IVF: Transport IVF is a recent innovation pioneered in the Netherlands; and by Dr. Kingsland of UK. In this, the egg retrieval is performed by the gynecologist in his own clinic or hospital; and the eggs ( in the follicular fluid) are then transported to a central IVF laboratory by the husband in a portable incubator . Insemination, fertilization and embryo transfer take place in the central laboratory. This method allows gynecologists to take an active part in their patients' treatment; ensures high quality, since all laboratory procedures are performed in a central laboratory; and also minimizes patient inconvenience ( since superovulation and egg retrieval are done by the local gynecologist, the number of visits the patient has to make to the IVF Center are minimized.)