What is PGD ( preimplantation genetic diagnosis) ?

How is PGD done ?
What are the controversies regarding the use of PGD ?

What is PGD ( preimplantation genetic diagnosis) ?

PGD was first developed for patients who were at risk of having children with serious genetic disorders, which often discouraged them having their own biological children. These couples are often faced with attempting a type of "Russian Roulette" to have children, many times having to confront the difficult decision to terminate an affected pregnancy.

Consider a woman known to be carrying an X-linked disease with a 50% risk of an affected male in each pregnancy. In addition, her daughters have a 50% risk of being carriers, but are unlikely to be clinically affected. She may not wish to become pregnant if she has to make decisions about an affected child in a viable pregnancy. However, she would become pregnant if she knew she had conceived a daughter, and with preimplantation diagnosis this possibility becomes a reality. PGD thus eliminates the need for possible pregnancy termination after prenatal diagnosis of a genetically-affected fetus. 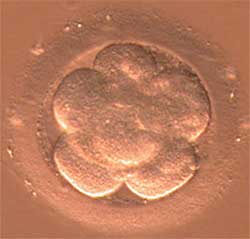 Fig 1. 8-cell embryo, ready for embryo biopsy. One single cell will be removed and sent for genetic testing

Research has shown that it is possible at three days after fertilization to remove one or two cells from an 8-10 celled embryo without detriment to its further development. Embryos were sexed on the basis of the presence or absence of a DNA fragment specific for the Y chromosome; in 1990 two sets of twin girls were born to five couples at risk of passing on an X linked disorder. Subsequently, a number of babies have been born after the preimplantation genetics has ruled out diagnosis of cystic fibrosis, Tay Sachs disease, Lesch Nyhan syndrome, Duchenne muscular dystrophy and for diseases carried on the X chromosome.

How is PGD done ?

How is PGD done? After In Vitro Fertilization, in the past, on the 3rd day, the 8-cell embryo was biopsed. to obtain blastomeres (single cells) for molecular diagnosis. An embryo biopsy is done using micromanipulators under the visual control provided by an inverted tissue culture microscope. The embryo is held in position using a holding pipette, while a glass needle is used to drill a hole through the zona pellucida (the shell or the outer layer of the embryo ) using a laser . A single cell is then removed by gentle suction. The cell (called a blastomere) is then available for genetic diagnosis. A recent advance is doing a biopsy after the embryo has become a blastocyst. A Day 5 trophectoderm biopsy allows the doctor to remove more cells safely from the embryo, allowing more accuracy and less damage.

Fig 2. Embryo biopsy, with a single blastomere being sucked out from the 8-cell embryo. This will be sent for analysis.

Analysis of genetic material (DNA) from a single cell is performed either using a technique called FISH ( fluorescent in situ hybridisation) or PCR ( polymerase chain reaction) . Newer techniques such as array CGH ( comparative genomic hybridization) , CCS ( comprehensive chromosomal screening) and NGS ( next generation sequencing) provide even more accuracy . FISH utilises fluorescent probes, which are specific for a given chromosome, and therefore allows one to screen embryos for chromosomal normality. PCR allows one to amplify (mutiply ) a selected DNA sequence of interest, so that it can be analysed. After the analysis on the single cell, the embryos are kept in culture and allowed to further divide. Once the appropriate molecular diagnosis is made, unaffected embryos can be transferred back into the uterus in the IVF cycle.

PGD / PGS is now also being misused in order to increase pregnancy rates for older infertile women. One of the reasons older women have a poorer pregnancy rate is because their embryos are often chromosomally abnormal, because of the fact they have older eggs ( which may have genetic defects). The hope was that PGS would allow the doctor to select only the chromosomally normal embryos, so that only these can be transferred back into the uterus, resulting in a higher pregnancy rate. While this seems logical, tragically  PGS has been shown to reduce pregnancy rates . Read more at http://blog.drmalpani.com/2015/05/how-pgs-overpromises-and-underperforms.html

What are the controversies regarding the use of PGD ?

PGD is emotionally a very touchy area, because not only are we dealing with human embryos - the very start of new life, but we are studying their basic blueprint - their genes - the stuff of which humanity is made. Obviously, this is likely to cause people to take very strong views on what is right and what is wrong - so that they start thinking with their hearts rather than their heads ! Many people confuse PGD with genetic engineering. A familiar refrain is we shouldn't be doing any of this because scientists are becoming too big for their boots - they are trying to play God by tinkering with the genes , and it is far better that they leave this entire field well alone, since we will never be able to understand any of it - it is beyond human wisdom. This is a common knee-jerk reaction, which precludes further rational debate.

The other view point is - Why not ? If man can improve on Nature, then why should he not try? After all, building a house is simply man's way of improving on nature - and if we can improve man himself, then why not? Seen in this light, then studying the molecular genetics of the human embryo would be the ultimate goal of all medicine. In the past, doctors used to treat adults. In the beginning of the 20th century, we started treating children, and the field of pediatrics was born. We can now treat the fetus - and the future patient of the 21st century will be the embryo - this is a logical progression!