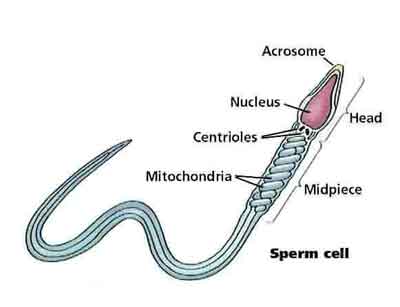 Fig 2. The anatomy of a sperm

What is a normal sperm count ?

If there are enough sperms.

If the sample has less than 15 million sperm per ml, this is considered to be a low sperm count. Less than 5 million is very low. The technical term for this is oligospermia (oligo means few). Some men will have no sperms at all and are said to be azoospermic. This can come as a rude shock because the semen in these patients look absolutely normal - it is only on microscopic examination that the problem is detected.

You can see what a semen analysis report looks like at https://www.drmalpani.com/pdf-view.php?file=%2Fpdf%2Fsemen_analysis_report.pdf

What is normal sperm motility ?

Whether the sperms are moving well or not (sperm motility).

The quality of the sperm (Sperm Video) is often more significant than the count. Sperm (Sperm Video) motility is the ability to move. Sperm are of 2 types - those which swim, and those which don't. Remember that only those sperm which move forward fast are able to swim up to the egg and fertilise it - the others are of little use.

Motility is graded from a to d, according to the World Health Organisation (WHO) Manual criteria, as follows.

Sperms of grade c and d are considered poor. If motility is poor
(this is called asthenospermia), this suggests that the testis is producing poor quality sperm and is not functioning properly - and this may mean that even the apparently motile sperm may not be able to fertilise the egg.

This is why we worry when the motility is only 20% (when it should be at least 50% ?) Many men with a low sperm count ask is - " But doctor, I just need a single sperm to fertilise my wife's egg. If my count is 10 million and motility is 20%, this means I have 2 million motile sperm in my ejaculate - why can't I get her pregnant ? " The problem is that the sperm in infertile men with a low sperm count are often not functionally competent - they cannot fertilise the egg. The fact that only 20% of the sperm are motile means that 80% are immotile - and if so many sperm (Sperm Video) cannot even swim, one worries about the functional ability of the remaining sperm. After all, if 80% of the television sets produced in a factory are defective, no one is going to buy one of the remaining 20% - even if they seem to look normal.

What is normal sperm morphology ?

Whether the sperms are normally shaped or not -

what is called their form or morphology. Ideally, a good sperm (Sperm Video) should have a regular oval head, with a connecting mid-piece and a long straight tail. If too many sperms are abnormally shaped (this is called teratozoospermia, when the majority of sperm have abnormalities such as round heads; pin heads; very large heads; double heads; absent tails) this may mean the sperm are functionally abnormal and will not be able to fertilise the egg. Many labs use Kruger "strict " criteria (developed in South Africa ) for judging sperm normality. Only sperm which are "perfect" are considered to be normal. A normal sample should have at least 15% normal forms (which means even upto 85% abnormal forms is considered to be acceptable !)

Most labs don't have the expertise to do this test properly and end up misleading their patients by reporting a high number of abnormal forms ! Many IVF clinics do this, to pressurise patients  into doing IVF/ICSI. Don't let the lab cheat you ! Ask for the stained semen slide, to make sure they have done the test properly. Read more at https://www.drmalpani.com/knowledge-center/articles/the-teratozoospermia-abnormal-semen-form-racket-for-diagnosing-male-factor-infertility

Under the microscope, this is seen as the sperms sticking together to one another in bunches. This impairs sperm motility and prevents the sperms from swimming upto through the cervix towards the egg.

What does the presence of pus cells in the semen signify ?

Whether pus cells are present or not.

While a few white blood cells in the semen is normal, many pus cells suggests the presence of seminal infection. Unfortunately, many labs cannot differentiate between sperm precursor cells ( which are normally found in the semen) and pus cells. This often means that men are overtreated with antibiotics for a "sperm infection" which does not really exist !

Read more about this scam at https://www.drmalpani.com/knowledge-center/articles/pus-cells-in-the-semen---and-how-to-make-sense-of-the-report

Some labs use a computer to do the semen analysis. This is called CASA, or computer assisted semen analysis. While it may appear to be more reliable (because the test has been done "objectively" by a computer), there are still many controversies about its real value, since many of the technical details have not been standardised, and vary from lab to lab.

What does a normal semen analysis report mean?

A normal sperm report is reassuring, and usually does not need to be repeated. If the semen analysis is normal, most doctors will not even need to examine the man, since this is then superfluous. However, remember that just because the sperm count and motility are in the normal range, this does not necessarily mean that the man is "fertile". Even if the sperm display normal motility, this does not always mean that they are capable of "working" and fertilising the egg. The only foolproof way of proving whether the sperm work is by doing IVF (in vitro fertilisation)!

What are the reasons for a poor semen analysis report ?

Poor sperm tests can results from:

If the sperm test is abnormal, this will need to be repeated 3-4 times over a period of 3-6 months to confirm whether the abnormality is persistent or not. Don't jump to a conclusion based on just one report - remember that sperm counts do tend to vary on their own! It takes six weeks for the testes to produce new sperm - which is why you need to wait before repeating the test. It also makes sense to repeat it from another laboratory, to ensure that the report is valid.

What if my sperm count is zero ( azoospermia) ?

Some men will find to their dismay that they have a zero sperm count. This is called azoospermia, and comes as a complete shock, as these men have normal libido, can ejaculate normally, and their semen looks normal. Read more about this at https://www.drmalpani.com/knowledge-center/the-infertile-man/azoospermia

If the report shows your sperm count is zero, please ask the laboratory to re-check it again. It's useful to request the laboratory to check two consecutive semen samples, ejaculated about 1 hour apart ( sequential semen analysis). The laboratory should be also requested to centrifuge the sample and check the pellet for sperm precursors. Some men will have occasional sperm in the pellet, which means they are not really azoospermic. This is called cryptozoospermia.

Some men have obstructive azoospermia because of an absent vas deferens. Their semen volume is low ( 0.5 ml or less); the pH is acidic and the fructose is negative. The diagnosis can be confirmed by clinical examination, which shows the vas is absent. If the vas can be felt in these men, then the diagnosis is a seminal vesicle obstruction.

Men with non-obstructive azoospermia have a normal passageway, but abnormal testicular function, and their testes do not produce sperm normally. Some of these men may have small testes on clinical examination. The testicular failure may be partial, which means that only a few areas of the testes produce sperm, but this sperm production is not enough for it to be ejaculated. Other men may have complete testicular failure, which means there is no sperm production at all in the entire testes. The only way to differentiate between complete and partial testicular failure is by doing multiple testicular micro-biopsies to sample different areas of the testes and send them for pathological examination.

What if the sperm count is persistently low? Then other tests may be advised, to try to pinpoint what the problem is; and these are described in the next chapter.