What is ICSI ?
How is ICSI performed ?
How can ICSI be used to treat men with a zero sperm count (azoospermia) ?
What is TESE (testicular sperm extraction) ICSI ?

Fig 1. A highly magnified view of 3 sperm under the microscope.

The introduction of Microinjection Technology into the in vitro fertilization (Fertilization Video) laboratory has revolutionized our treatment of the infertile man. Intracytoplasmic sperm injection, or ICSI (ICSI Video ) (pronounced "eeksee"), is a new infertility treatment that uses micromanipulation technology for treating male infertility. What ICSI promises is the possibility for every man to father his own baby - no matter what his medical problem!

How is ICSI performed ?

The Procedure for ICSI (ICSI Video)

ICSI is done in a superovulated cycle during which fertility drugs (human menopausal gonadotropin - HMG- injections) are administered to the wife to aid in the production of multiple eggs, which are then removed under vaginal ultrasound guidance as is done for IVF. 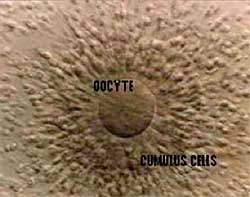 These cumulus cells are removed by repeated passage of the oocyte cumulus corona complex through fine pipettes, and by treating them with a chemical called hyaluronidase so that these cells are stripped off. The denuded eggs are examined, and only mature eggs (eggs in metaphase II, which have a polar body) are used for ICSI.

For men with variable sperm counts, which vary from zero to a few thousand, it may be helpful to freeze a sample ( which contains sperm ) in advance. For patients with azoospermia, sperm harvesting techniques need to be used to retrieve the sperm. For men with obstructive azoopsermia,( because of duct blockage or absence of the vas deferens) , the simplest technique is called PESA (percutaneous epididymal sperm aspiration), in which the sperm is sucked out from the epididymis by puncturing it with a fine needle. Occasionally, one may have to use microsurgery to find epididymal sperm, and this is called MESA (microepididymal sperm aspiration).

How can ICSI be used to treat men with a zero sperm count ( azoospermia) ?

For patients with obstructive azoopsermia in whom sperm cannot be found in the epididymis, it is always possible to find sperm in the testis. The easiest way to retrieve this is through TESA or testicular sperm aspiration , in which the testicular tissue is sucked out through a fine needle, under local anaesthesia. The testicular tissue is placed in culture media and sent to the lab, where it is processed. The sperm are liberated from within the seminiferous tubules ( where they are produced ) and are then dissected free from the surrounding testicular tissue.

Using sperm from the epididymis and testis for ICSI in order to treat patients with obstructive azoospermia is logical, and thus conceptually easy to understand. However, surprisingly, it is possible to find sperm even in patients who have testicular failure ( nonobstructive azoospermia) - even in those men with very small testes. The reason for this is that defects in sperm production are "patchy"- they do not affect the entire testis uniformly.

This means that even if sperm production is absent in a certain area, there may be other areas in the testis where sperm production would be normal (this could be because the genetic defect that causes abnormal spermatogenesis may be "leaky"). Since such few sperm are needed for ICSI, we can find enough sperm in over 50 per cent of patients with testicular failure , even if their testes are as small as a peanut!

However, while finding sperm is quite easy in men with obstructive azoospermia (since their testes are functioning normally ), patients with nonobstructive azoospermia ( testicular failure) can be very challenging. Often, sperm production in these men is sparse, and multiple sites in the testis may need to be sampled before being able to find sperm. This can be done by performing mutiple tiny microbiopsies , and this is called TESE or testicular sperm extraction. (One of our patients suggested that we call this procedure TSEICSI - which stands for testicular sperm extraction with ICSI, and pronounce it as "sexy"!) This can be done through the needle, or as an open procedure performed under direct vision through a tiny skin incision under local anesthesia and sedation.

Finding sperm in the testicular tissue can be a laborious process , depending on the degree of sperm production, and for some men with partial testicular failure, it can take upto 2-3 hours to find the sperm. Also, testicular sperm are technically hard to work with in the laboratory and only some IVF clinics have the requisite expertise. For men with nonobstructive azoopsermia, some clinics perform the TESE the day prior to egg retrieval, because they believe culturing the testicular tissue in the incubator for 24 hours helps the sperm to acquire motility, which makes them easier to work with. In case no sperm are found, either the couple decides to cancel the egg retrieval and abandon the cycle, or to go ahead with using donor sperm for IVF, as a backup option.

In patients in whom surgery needs to be performed in order to recover testicular or epididymal sperm, it is now possible to freeze the excess sperm. These sperm can then be thawed and used in future cycles in needed, thus sparing the patient the need for repeated surgery for sperm retrieval.